What does AMV mean?

AMV stands for Anime Music Video, a type of video edited by fans which mixes anime footage with popular music.

Where does AMV come from? 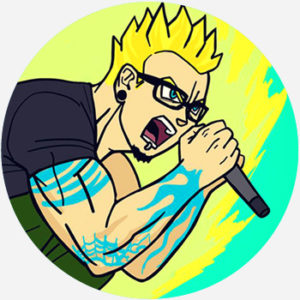 In the West, Jim Kaposztas is credited with developing the first anime music video by editing scenes from the anime Star Blazers with the Beatles’ “All You Need is Love,” using two VCRs. The practice grew throughout the 1990s among anime fans, who often distributed shows via copied tapes. Often these fan-edited videos were used to fill leftover tape space. Fans on usenet’s rec.arts.anime channel used the abbreviation AMV as early as 1992.

AnimeMusicVideos.org, a forum for AMV fans and creators was established in 2000. AMVs began to appear on YouTube around 2005, shortly after the site was founded. Many of these include AMV in either the title or description.

Anime distribution companies and record labels have become aware of these fan works, taking different stances toward their legality. In 2005, Wind-up Records served AnimeMusicVideos.org a cease-and-desist letter instructing the site to stop hosting videos with music from the label’s bands. On the other hand, an infringement specialist for the anime distributor Funimation stated in 2009 that in some cases distributors see AMVs as free promotion.

In his 2008 book on remix culture, law professor Lawrence Lessig pointed to AMVs as a form of remix that emerges from and develops its own communities. Some anime conventions host AMV contests, as did the Japanese band Boom Boom Satellites in 2008.

do u ever listen to a certain song and immediately see a warrior cats amv in your head
@Reinfoxy, February, 2018
Kids out here saying they ship two characters but never even made an amv of them set to a nightcore remix of "everytime we touch" smh
@ssbmTriffle, February, 2018
One of the most beloved and highest-attended events held at Anime Expo (AX), AMV participants now have another reason to get to work on their submissions: Over $10,000 in cash and prizes will be awarded to category winners!
Anime News Network, February, 2011
SEE MORE EXAMPLES

AMV creators are often teenage males, although female participation has been growing since the mid-2000s. AMV has also been applied to music videos made from western animation.

Fanvids and MAD videos are related but different forms. Fanvids are often made by editing live-action TV shows or movies. MAD videos are also video remixes that are usually parodies. The name MAD may come from an early example known as the Tape of Madness or it may stand for Music Anime Douga (douga meaning video).

This is not meant to be a formal definition of AMV like most terms we define on Dictionary.com, but is rather an informal word summary that hopefully touches upon the key aspects of the meaning and usage of AMV that will help our users expand their word mastery.