The at sign is most commonly found in email addresses and on social media, where it is used to tag specific users in posts.

The symbol, @, can also stand in for the word at in everyday writing and in online conversation, where it is often used as a verb. 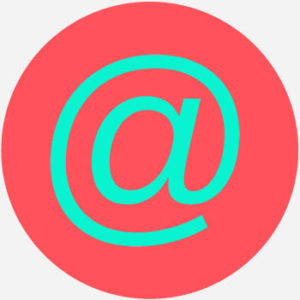 The exact origins of the at sign are unknown. One theory thinks monks created the symbol to save space on valuable manuscript paper by combining the letters of ad, the Latin word for to(ward). Another theory supposes French writers made it up to reduce pen strokes required to write à, or at.

The first known written record of the at sign comes from a letter written by Francesco Lapi in 1536. A merchant from Florence, Lapi used the symbol as a unit of measurement for shipping wine. Most likely stemming from this use, the at sign was found useful by other merchants and, later, commercial grocers and accounting professionals. They used the symbol to indicate per-unit cost. For example, “5 apples @ $5 each” means that the total cost of 5 apples would be $25. @ became useful enough to merit inclusion on commercial typewriters by the 1880s.

The at sign was first used in email addresses in 1971. Ray Tomlinson, a computer scientist who worked for BBN Technologies, was tasked with networking early computers to a precursor to the internet in a way that would allow messages to be sent between them. He used a two-part address to send and receive messages, with the sender or recipient’s name first and their computer’s identifier second. To separate the two, he chose a little-used key on the keyboard: @.

kid in white shirt sitting across from jolly holiday in disneyland please meet me @ the castle tonight i’m in love with you
@calistabarnes_, March, 2018
Bipolar disorder “does not have to define you,” @MariahCarey told @People, “and I refuse to allow it to define me or control me.”
@thelilynews, April, 2018
I wasn’t able to score tickets to see the touring company of Hamilton, because I didn’t have a house to mortgage and also, I don’t like Hamilton. Don’t @ me.
Courtenay Hameister, The Portland Mercury, April, 2018
SEE MORE EXAMPLES

Today, the at sign is widely used as a tool of the internet. It is most commonly found in email addresses to separate the username from the domain name and in social-media handles (e.g., @dictionarycom), especially on Twitter and Instagram. Most major social-media platforms allow users to tag others by typing “@” and then another user’s handle, which acts as a form of digital address.

By the 2010s, the at sign had become so widespread as a way to tag someone on social media that people began using it as a verb, to at or @ someone, or “mention someone directly in a message.” The verb is especially common in the phrase don’t @ me. This phrase nods to the at sign’s function in tagging users in posts. When a social-media user says “don’t @ me,” they are sharing a potentially unpopular opinion and humorously requesting that those who disagree with them refrain from responding, particularly by tagging them in a reply. Someone posting “don’t @ me” recognizes that they have shared a controversial opinion, and they will likely be engaged in debate anyway. This makes don’t @ me a signal of playful controversy rather than an earnest request not be @’d or atted (with atting a fairly common verb on Twitter).

Outside of the internet, people use the at sign as shorthand for the word at in everyday writing, most often in reference to times, dates, and places of scheduled events (e.g., See you @ the restaurant @ 7pm!).

This is not meant to be a formal definition of at sign like most terms we define on Dictionary.com, but is rather an informal word summary that hopefully touches upon the key aspects of the meaning and usage of at sign that will help our users expand their word mastery.