What does baby boomers mean?

The baby boomers are the generation born between the early 1940s to the early 1960s, especially in the US.

Where does baby boomers come from? 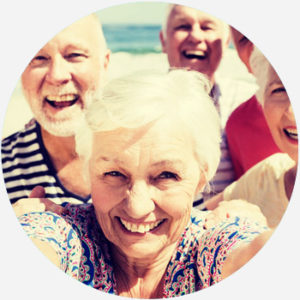 The term baby boomer, sometimes shortened just to boomer, refers to an individual, usually of American birth, who belongs to the generation born from the 1940s through the early 1960s—a time when there was a boom in births after World War II.

Though their parents, sometimes called the Silent Generation, survived both the Great Depression and Second World War, the baby boomers came of age in a period of great economic prosperity and privilege.

During and after World War II, there was a noticeable rise in the number of new babies being born in the US, described as a baby boom in Life magazine. A 1963 edition of The Salt Lake Tribune used baby-boomers when discussing their extensive television viewing. (Baby boomers were killing radio, it seems.) A 1970 article in The Washington Post notably wrote of the “baby boomers of the Eisenhower decade.”

Google data shows that use of baby boomer has increased dramatically from the 1980s into the present day, corresponding to when they took over the workforce and institutions as their parents retired, aged, and passed away.
The term has likely also spiked due to the work of William Strauss and Neil Howe, whose 1991 book Generations: The History of America’s Future, outlined generations as we understand them today. You can thank them, too, for the term millennial. 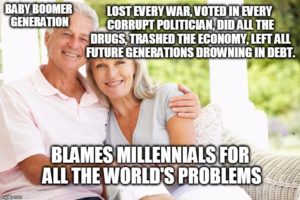 imgflip
In the 2010s, baby boomers have widely been blamed for a lot of society’s problems. A 2017 book by Bruce Cannon Gibney, A Generation of Sociopaths: How the Baby Boomers Betrayed America, slams the generation for racking up costs and deficits and shirking climate change—all the while enjoying the greatest wealth and power in America’s history.

It’s so sweet that baby boomers stopped watching TV long enough to tell millennials to get off their phones.
@solomongeorgio, May, 2018
I actually hate the baby boomers generation. These people went to uni for free and bought yards for pennies yet WE have it easy? loool suck your mothers.
@SoulSmellsofAmi, May, 2018
Boomers overall and many of those turning 65 consider work to be part of retirement, and a significant percentage say that they never will consider themselves retired.
Jeff Love, AARP, December, 2010
SEE MORE EXAMPLES

While the term originally refers to the US-born, baby boomer has spread to other, usually English-speaking populations born at the same time around the globe.

Use of baby boomer can be neutral.

But, it is very often used critically.

This is not meant to be a formal definition of baby boomers like most terms we define on Dictionary.com, but is rather an informal word summary that hopefully touches upon the key aspects of the meaning and usage of baby boomers that will help our users expand their word mastery.