The tweet sparked a lot of humorous discussion, light-hearted outrage, and general puzzlement on social media.

Where does #Bagelgate come from? 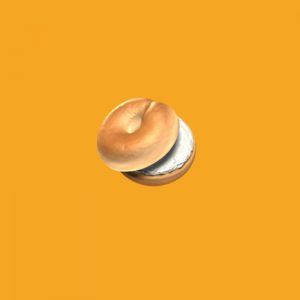 On March 25, 2019, Twitter user @AlkKrautmann tweeted a a picture of bagels he very charitably brought for his office. There was something curious about them, though: they were cut vertically, like sliced bread, rather than through the middle. @AlkKrautman wrote that this was the “St. Louis secret” of ordering bagels—and the internet had opinions.

Today I introduced my coworkers to the St Louis secret of ordering bagels bread sliced. It was a hit! pic.twitter.com/XNGbljtpYz

Over the next few days, the nontroversy was quickly dubbed #Bagelgate, featuring the –gate suffix (from Watergate) to indicate a scandal. Everyone from everyday bagel eaters to companies like Panera to media outlets like BuzzFeed weighed in, typically commenting that such slicing was sacrilegious—and wondering what’s going on in St. Louis. Others, though, saw the “St. Louis-style” as genius.

Hey Alek, next time bagels are on us, sliced however you'd like. 😉 Can you DM us?

Officer, I would like to report a crime. https://t.co/s4oFU1dNW7

But, hold your cream cheese! This was not the first #Bagelgate! One occurred in September 2018 when Sex and the City actress and New York gubernatorial candidate Cynthia Nixon revealed she ate lox on a cinnamon raisin bagel.

Yes, I like to eat a Cinnamon Raisin Bagel with… lox, capers, red onions, cream cheese, and tomatoes.

Give a few bucks to help support our campaign in the last days before the primary and enter for a chance to have YOUR favorite bagel with me: https://t.co/Q9Whsj4T6j. pic.twitter.com/pkfjRLNZuT

Yet another occurred in October 2018 when Apple unveiled what many New Yorkers felt was an unimpressive bagel emoji, 🥯. Apple later revamped it.

I’m organizing a march in New York City against Apple’s just-revealed bagel emoji, which comes out with the next iOS update. It looks like something you get from a cardboard box in the freezer section at Walmart. This insult will not stand. pic.twitter.com/Z44YFBuUlU

The only acceptable time to cut a bagel in half: when it is the bread portion of a sandwich consisting of more than two ingredients besides the bagel. #bagelgate
@hintofspy, April, 2019
Soon after, #SaintLouisStyle usurped #BagelGate as the absurd food Twitter hashtag du jour. #SaintLouisStyle is a now an emblem for food scams all over the world – from fast food dinners at the White House to the distressed shores of the island of Exuma during the Fyre Festival.
Michelle Santiago Cortés, Refinery29, March, 2019 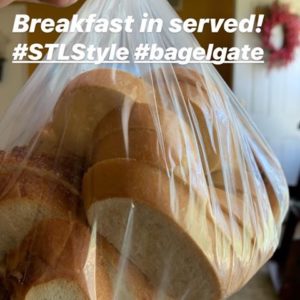 Twitter erupted in good-natured dispute about #Bagelgate. Two sides emerged in the Bagel Battle: those in favor of traditional bagel cutting, and those who realized the advantages of bread-sliced bagels.

Don’t judge a bagel for the way it’s sliced. Judge it by how much Philly Cream Cheese it has on it. #StandWithSTL #Bagelgate pic.twitter.com/UKEhcD6UDQ

Others started poking fun of St. Louis by joking they ate all of food in weird ways, referencing #Bagelgate and #StLouisStyle.

This is not meant to be a formal definition of #Bagelgate like most terms we define on Dictionary.com, but is rather an informal word summary that hopefully touches upon the key aspects of the meaning and usage of #Bagelgate that will help our users expand their word mastery.