What does bootstrap paradox mean?

The bootstrap paradox is a hypothetical causal loop in time travel in which one event causes a second, which was actually the cause of the first.

Where does bootstrap paradox come from? 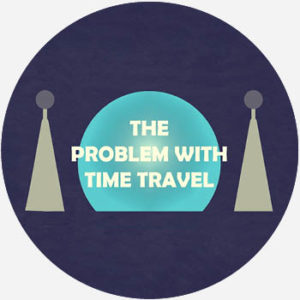 Though thought experiments about time travel date back centuries, the bootstrap paradox comes from Robert Heinlein’s story “By His Bootstraps.” It was published in the October, 1941 issue of the Astounding Science Fiction magazine under the pseudonym Anson MacDonald.

In the story, main character Bob Wilson is working on his graduate thesis on time travel when a future version of himself (who he does not recognize) appears through a time portal. He then becomes ensnared in a causal loop, traveling backward and forward through the time portal and encountering multiple versions of himself from different points in his timeline. By the end of the story, his futile efforts to break the timeline have led to the first instance of Bob meeting his future self, bringing the loop full circle.

Mhm. This is what we call the bootstrap paradox! whovians know it well. A bit confusing but it's all Wibbly wobbly timey wimmy stuff. XD
@JGoku18, February, 2018
it’s 2am and I’m thinking about the bootstrap paradox wondering how many inventions we use in our daily lives have never actually been invented/songs or books we all know have never actually been written/etc send help pls
@loadedgun, January, 2018
Cleaning up a bootstrap paradox is even worse. With those, you’ve got to erase a parasitic time segment that’s been entangled with a host timeline. Screw that up, and you could end up erasing both. Talk about paperwork. Yeesh.
Steve DeGroof, First Lines, 2016
SEE MORE EXAMPLES

This is not meant to be a formal definition of bootstrap paradox like most terms we define on Dictionary.com, but is rather an informal word summary that hopefully touches upon the key aspects of the meaning and usage of bootstrap paradox that will help our users expand their word mastery.