Case of the Mondays

What does Case of the Mondays mean?

A doctor can’t cure this one. A Case of the Mondays is an especially bad mood brought on by the onset of the workweek or the school week–which, for most of us, begins on Mondays.

Where does Case of the Mondays come from? 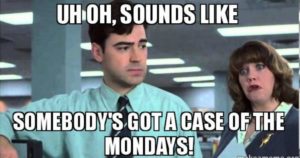 In the United States, the five-day workweek (starting on Monday) goes back to New England factories in 1908. In most American businesses, the 9-5, Monday-Friday workweek is still the norm over 100 years later.

This was certainly the case in the 1999 comedy film Office Space. This film satirized US corporate/work culture and middle management. At one point in the film, the character Peter (played by Ron Livingston) complains to his coworkers that he wants to get out of the office. In response, a female employee (Jennifer Jane Emerson) states as condescendingly and annoyingly as possible that Peter has “a Case of the Mondays.” Case, here, is an “incident of a disease,” here imagined as the Mondays, the gloomy or sour mood brought by the responsibilities and obligations of a new week.

Especially due to Emerson’s delivery of the line, Case of the Mondays became one of several quotable lines from the film and helped popularize the phrase.

Examples of Case of the Mondays

I've got a case of the Mondays today and I don't like it can I exchange it for a case of chocolate or something?

@ErikaHarlacher, November 2018
Have a case of the Mondays? This is sure to help! Disney-Pixar released a teaser trailer for “Toy Story 4” Monday morning.
WNEP, November 2018
A reporter, who has worked his way up to a top-level and high pressured position with a large metropolitan daily, suffers from a chronic case of "the Mondays."
Diane Weathers, Black Enterprise, February 1976
SEE MORE EXAMPLES

Who uses Case of the Mondays?

Case of the Mondays has been used in countless memes, forum posts, tweets, content published on Mondays, and, of course, feet-dragging or snarky comments around the water cooler to express that bad mood we feel on having to begin the work or school week on Monday. It’s what causes those Sunday scaries, after all.

Barrage of emails for me to comb through and left my key card on top of the hill in my car ugh, some1 got a case of the mondays? meh…

My boss do u wanna come in early? Me…
serious case of the Mondays #mondaynofunday #😭😭 pic.twitter.com/UNURgilxRo

Case of the Mondays is also often used in direct reference to the film Office Space.

a bad case of the mondays…maybe i need more flare.

“Sounds like somebody’s got a case of the Mondays!” pic.twitter.com/3oehBa1XWF 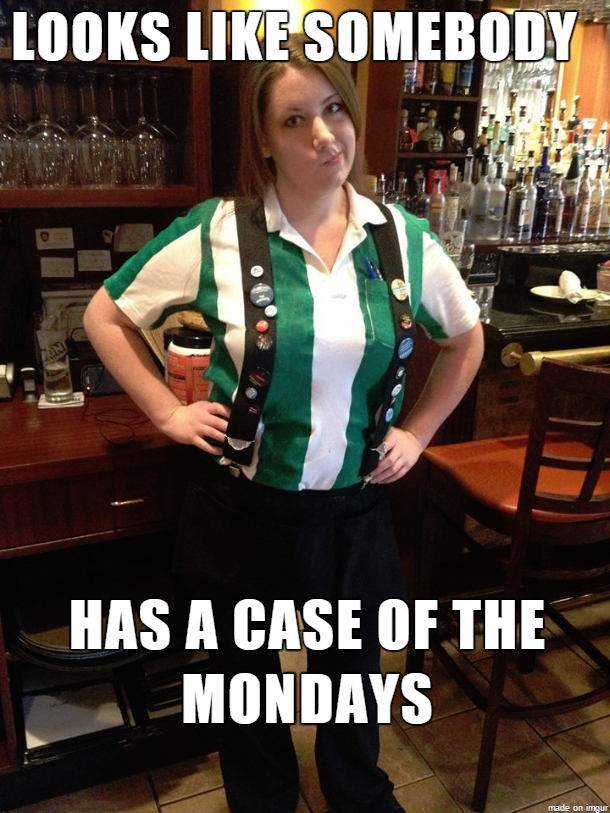