What does Chatzy mean?

Chatzy is a free private-chat service known as a hub for cybersex, involving roleplaying.

Where does Chatzy come from? 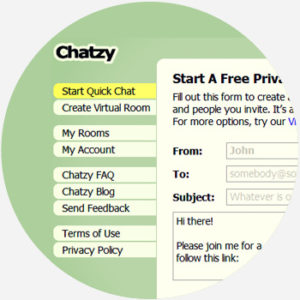 Chatzy was created as a side project in 2001, and it grew into a small organization based in Europe. The free, private-chat site began to pick up online traffic around 2004, hitting peaks in 2015 and 2016. It is generally known as a popular place for kinky, furry, and other fetish-specific cyber sex, with users frequently citing the abbreviation RP in reference to types of roleplay and characters.

Roleplays on Chatzy are inspired by diverse sources; examples of chat-room roleplay themes include the Broadway musical Hamilton, teen-writer Rick Riordan characters, My Little Pony, Pokémon, and anime such as Naruto and Hetalia. More general search terms for finding specific chat rooms and communities (unrelated to sexual roleplaying) include school, Christianity, and help with personal issues such as depression or suicidal thoughts.

Okay fun story I use to Roleplay Marlene on chatzy, yes?
@FatalWarnings, January 2018
would you believe me if i said that one of the reasons why i improved in english is because a few years ago i did a shit ton of rps on chatzy
@muhanct, January 2018
In Houston, however, older women had very different tastes in social networking sites. Their top three in the last month are: 1. CruiseCritic Message Boards (boards.cruisecritic.com) 2. Yahoo! Games Groups (games.groups.yahoo.com) 3. Chatzy.com
Corilyn Shropshire, July 2009
SEE MORE EXAMPLES

Chatzy is relatively well-known for being free, user-friendly, and a host to a diverse range of communities when it comes to sexual preferences. For this reason, it is generally used in a positive way. However, it can also be a subject of mocking humor for online users outside the Chatzy communities. Some users upload YouTube videos of their chat-room conversations, sometimes as a tutorial or sincere introduction to a particular type of conversation, but primarily as a humorous trolling pastime.

As the internet has “grown up,” Chatzy is sometimes referred to in a nostalgic tone, the same tone one might refer to their former MySpace page or another outdated but beloved technological platform or device.

This is not meant to be a formal definition of Chatzy like most terms we define on Dictionary.com, but is rather an informal word summary that hopefully touches upon the key aspects of the meaning and usage of Chatzy that will help our users expand their word mastery.