What does chilly willy mean?

In slang, a chilly willy refers to a method of ingesting alcohol, often vodka, through the nose or, less commonly, the eyes.

Chilly Willy is also a penguin cartoon character from the 1950s.

Where does chilly willy come from? 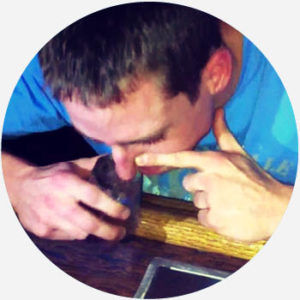 As a way of ingesting alcohol, a chilly willy is similar to taking a shot, but since it is snorted, it can lead to faster intoxication. Usually done with vodka, a chilly willy is often issued as a party challenge or done for quick inebriation. Due to vodka usually being served cold, a chilly willy shot should feel chilly as it is done, hence the name.

There is a mixed cocktail also called a chilly willy, but the chilly willy shot does not appear to earn its name from the cocktail.

Although an Urban Dictionary article appeared in 2003 defining the phrase, chilly willy came into greater prominence when multiple news sources labeled it a dangerous activity. These sources include the Washington Examiner in 2007 and an Argentinian publication, MDZ Online, in 2011.

There are several videos of people doing a chilly willy on YouTube, usually as a challenge. The videos consist of them taking the alcohol through their nose and their reactions to their own quick inebriation.

fun fact: a chilly willy is when you snort alcohol through your nose! isn’t that neat?!
@bayleyrogers, September, 2017
The worst alcohol I've ever had was a Chilly Willy, which is ingesting vodka through your nose. Random fun fact.
@BreakABone, January, 2011
One weird thing about the original Chilly Willy cartoon character: he went 12 years as a star of television and theatrical shorts without ever uttering a word.
David Helwig, SooToday, October, 2014
SEE MORE EXAMPLES

A chilly willy is most commonly used as a noun (e.g., Let’s do a chilly willy!). Similar to the “cinnamon challenge” that gained traction in 2013, a chilly willy is more a stunt than an actual way to drink alcohol. It can also be prompted for the purpose of recording the shot to post onto social media.

Although not widely popular among most young people, a certain group of youth who like to party use chilly willy to describe a well-known activity. It may be a regional occurrence, as there has been coverage of it in South America and in the Midwest to Western United States.

The cocktail, as it is not a classic one and possibly regional, might be seen in some bars as a rotational specialty drink. Variations of the cocktail include either vodka or rum as the base.

Chilly Willy the penguin has seen some resurgence due to the internet. Theme songs posted on YouTube have comments of people fondly remembering the show, and the episodes have been uploaded online on ChillyWillyFan.com for fans of the show to watch.

This is not meant to be a formal definition of chilly willy like most terms we define on Dictionary.com, but is rather an informal word summary that hopefully touches upon the key aspects of the meaning and usage of chilly willy that will help our users expand their word mastery.