The phrase Colt 45 and 2 Zig-Zags is a lyric from rapper Afroman’s song “Crazy Rap,” in which he suggests malt liquor and weed are all that’s needed for a good time. It’s that we’re not disagreeing with you, but…

Where does Colt 45 and 2 Zig-Zags come from? 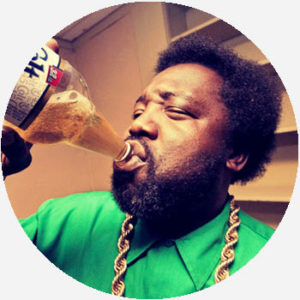 The lyric makes reference to Colt 45, which, among other malt liquor brands, became widely associated with hip-hop during the 1980s and 1990s, when marketers used popular rappers like Biggie, Tupac, and Snoop Dogg in advertisements targeting African-American youth.

Malt liquor has a reputation for being inexpensive, and more importantly, packed full of alcohol. Colt 45 wasn’t all that discreet about this either—in its 1980–90s commercials featuring actor Billy Dee Williams (or, as he’s known to Star Wars fanatics, Lando Calrissian), the phrase “It works every time” was used as a tagline. In the 2000s, the malt liquor industry came under fire for what many criticized as preying on the black community.

Zig-Zags, meanwhile, refers to the cigarette rolling paper of the same name that’s frequently used for making marijuana joints—and making 2 Zig-Zags slang for two joints. While the Zig-Zag brand can be traced all the way back to 19th-century France, the term has become closely associated with weed culture, and has been name-dropped not just by Afroman, but other artists such as Snoop Dogg and Eminem as well.

Examples of Colt 45 and 2 Zig-Zags

🎶Colt 45 and two Zig Zags Santa that's all he needs. He comes to your house after dark gifting what children need. 🎶#OnSantasChristmasList

Over the years, “Crazy Rap” has developed something of a cult status, anchored and best known by its hook: “Colt 45 and 2 Zig-Zags, baby that’s all we need.”

Online, it’s not uncommon to see a tweet containing or riffing on the song’s hook word for word, and in the real world, it’s often chanted in large groups.

Colt 45 and two Zig Zags, baby that’s all we need.
We can go to the park after dark, smoke that tumbleweed.
And as the marijuana burns we can take our turns,
Singing them dirty rap songs

Colt 45 and 2 Zig-Zags is also jokingly used in memes that depict people drinking alcohol or partying. 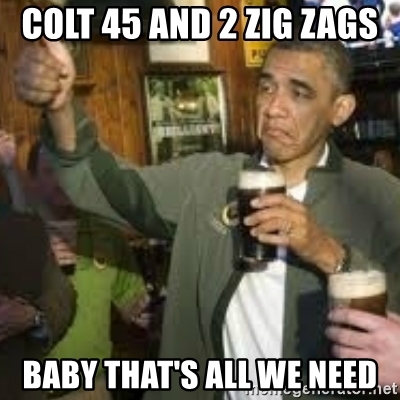