What does covfefe mean?

Covfefe is a viral typo for “coverage” from a tweet by Donald Trump. The meaning and intention of the mysterious word was the source of much internet discussion and humor.

Where does covfefe come from? 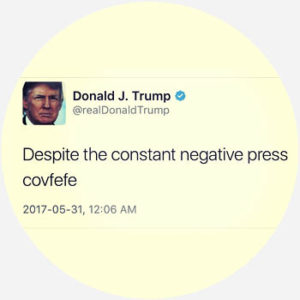 On May 31, 2017, President Donald Trump, already well-known for his tweeting and colorful vocabulary, tweeted: “Despite the negative press covfefe.” The random-seeming tweet remained untouched and unexplained for more than six hours, during which the internet exploded in speculation, largely in the form of puns, jokes, and made-up definitions for this non-word.

The hashtag “#covfefe” was, at the time, the number-one trending hashtag in the world, liked more than 162,000 times and retweeted more than 127,000 times in those six hours. It garnered such attention that it became a Twitter Moment, featuring several highly shared and retweeted memes and jokes about the word and its possible meaning(s).

The original tweet was deleted later on May 31, but Trump seemed to become aware of his gaffe and tweeted: “Who can figure out the true meaning of ‘covfefe’??? Enjoy!” In an attempt to save face later in the day, press secretary Sean Spicer stated, “The president and a small group of people know exactly what he meant.”

Some conspiracy theorists concluded that the tweet was a message written partially in Arabic and that covfefe could be translated to “I will stand up.” This was immediately debunked by Arabic scholars. Still others have attempted to tie the word to both Samoan and Yiddish origins, all of which have been disproven.

As of April, 2018, covfefe/”#covfefe” is still being regularly used on Twitter as an ironic nonsense word.

Covfefe chaos: What Trump’s typos say about his administration
Jenny Starrs, The Washington Post (headline), March, 2018
Anyone know if #covfefe is kosher for Passover? If not, can anyone recommend a substitute?
@JeffKasky, March, 2018
In California, they're shipping their coffee with a cancer warning. I think we should follow suit and put a President warning on our #covfefe!
@zeroclasseric, March, 2018
SEE MORE EXAMPLES

President Donald Trump is the inadvertent creator of covfefe. It has been adopted and reshaped by countless people around the world, but is primarily used as a joke to poke fun at the president.

Numerous news outlets around the globe covered the original story. Former Secretary of State and 2016 Democratic presidential candidate Hillary Clinton joked that she thought covfefe was “…a hidden message to the Russians.”

Talk show host and comedian Jimmy Kimmel, as another notable example, lamented: “[W]hat makes me saddest is that I know I’ll never write anything funnier than #covfefe.”

Social-media users have proven in abundance that covfefe can possess copious meanings and serves as a stand-in for many terms, especially its close lookalike coffee. For instance, “I wanted to go to bed, but the #covfefe I drank earlier kept me up.” Covfefe has been used as a humorous substitute for coconut or colada: “If you like pina #covfefe and getting caught in the rain….”

This is not meant to be a formal definition of covfefe like most terms we define on Dictionary.com, but is rather an informal word summary that hopefully touches upon the key aspects of the meaning and usage of covfefe that will help our users expand their word mastery.