What does deadname mean?

A deadname is the birth name of someone who has changed it. The term is especially used in the LGBTQ community by people who are transgender and elect to go by their chosen name instead of their given name.

Where does deadname come from? 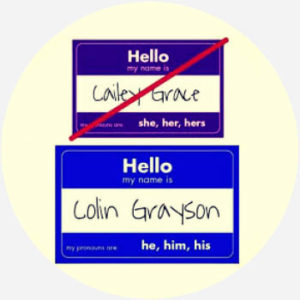 Deadname joins two words, dead and name, indicating that a given name no longer has any use or meaning—that is, it’s dead to its bearer. The term originated in transgender spaces online in 2012, particularly on blogs and message boards. It achieved greater prominence in 2015 when noted LGBTQ writers s.e. smith and Robin Tran used the term.

Deadname came into the public spotlight in 2015 when Caitlyn Jenner came out as a transgender woman. Though Caitlyn specifically asked to be referred to by her chosen name, some, including popular major publications, continued to use her deadname, Bruce Jenner, especially when referring to her storied Olympic career.

Transgender activists have also censured publications that use deadnames when reporting on deaths of transgender people, putting a critical eye on deadnaming and sparking a national conversation on the topic.

I’m making a new rule. If you misgender me or deadname me you have to pay me 50$ each time I don’t make the rules
@lunar_escapade, April, 2018
Just once, I'd like to see an article on a trans topic that doesn't deadname/misgender the victim, or host uninformed, bigoted commenters.
@thespinsterymc, November, 2014
The issue instead more commonly arises when someone deadnames a person who has already been out. For instance, Laverne Cox, star of Orange Is the New Black, has always been known as Laverne Cox in the public view. Trying to dig up a deadname for her and publishing it could be taken as an attempt to undermine Cox's identity.
German Lopez, Vox, June, 2015
SEE MORE EXAMPLES

Deadnaming is sometimes done inadvertently by people who have forgotten the name change or by companies who haven’t been updated. It’s also done maliciously, too, to denigrate the gender expression of a transgender person. Deadnaming is considered a microaggression and can cause dysphoria and anxiety.

While it seems most people who are transgender change their deadname, some elect not to use because they don’t want to completely erase who they were before their transition. It is still thought of as common courtesy to not use a deadname regardless of preference for the term itself.

Deadnaming is also used more broadly in discussions of the treatment and identity of people who are transgender in popular media, especially in criticisms of publications that use deadnames in coverage of a transgender person.

This is not meant to be a formal definition of deadname like most terms we define on Dictionary.com, but is rather an informal word summary that hopefully touches upon the key aspects of the meaning and usage of deadname that will help our users expand their word mastery.