What does dilly dilly mean?

Dilly dilly is a nonsense expression for “Cheers!,” popularized by a 2017–18 medieval-themed Bud Light ad campaign.

Where does dilly dilly come from? 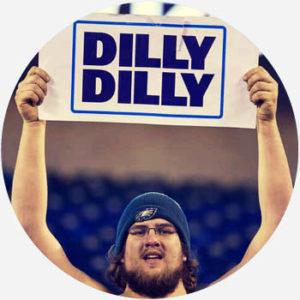 As it happens, dilly was a shortening of delightful or delicious in the 1930s, among many other slang meanings. In the 1990s and 2000s, dilly was also sometimes used for deal, especially in the greeting What’s the dilly, yo?

These uses, though, seem to have no conscious bearing on Bud Light’s dilly dilly. In August, 2017, Bud Light released “Banquet,” an ad created by Wieden+Kennedy that parodies the popular fantasy show, Game of Thrones.

In the ad, three subjects give their king gifts. The first two offer Bud Light, to which the king raises his beers and cries Dilly dilly! His fellow feasters join him in the toast. The third provides a fancy mead wine, which gets him sent to the “pit of misery”—and which punishment is met with cheers of Dilly dilly!

That November, Pittsburgh Steelers’ quarterback Ben Roethlisberger notably called out Dilly dilly! when calling an audible in a game against the Tennessee Titans.

Capitalizing on their success, Bud Light launched a follow-up dilly dilly ad in late 2017 and a third in early 2018, which aired during Super Bowl LII.

In spring 2018, it was rumored the Masters had banned dilly dilly from their golf tournament—a fan crowing the phrase was escorted off grounds. Seizing the moment, Bud Light issue a medieval-styled decree that they would send 1,000 t-shirts with the catchphrase so fans could still enjoy some dilly dilly.

Joining the likes of Got milk? or Wasabi! in recent decades, dilly dilly has proven itself one of those rare ad slogans that took on a life of its own as a reference in popular culture, with some people using dilly dilly as a festive cheer (Woo-hoo!), especially when watching sports and drinking—even if it’s a fancy mead wine.

Outside of Bud Light commercials and associated merchandise, you might expect dilly dilly to be shouted among more bro-ish, sports-loving types while slamming brewskis after their team scored.

Out of enjoyment of the original ad campaign, dilly dilly expresses good vibes and a feeling of camaraderie. The phrase itself now stands for “fun times” more generally,

This is not meant to be a formal definition of dilly dilly like most terms we define on Dictionary.com, but is rather an informal word summary that hopefully touches upon the key aspects of the meaning and usage of dilly dilly that will help our users expand their word mastery.