What does djent mean?

Djent is a subgenre of heavy metal characterized by low guitar tunings, string muting, and heavy syncopation. Djent also describes the guitar sound used in this style of metal.

Where does djent come from? 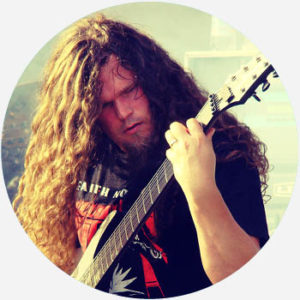 Mårten Hagström, guitarist for the Swedish heavy metal band Meshuggah, is often credited with coining the term djent when he used it to imitate the loud, distorted, and palm-muted guitar sound he used.

The term initially spread online on musicians’ forums. At first, the term was used to describe a specific guitar sound or technique. One forum thread from 2008 discusses the proper amplifier settings to achieve “a tight djent.” In another thread from the same year, one user tells a fellow poster that they “can’t djent” with their current picking technique. Misha Mansoor, now guitarist for the band Periphery, is sometimes credited with originating the term, but said he first encountered the term djent on Meshuggah fan forums.

The sound was popularized by Mansoor and other musicians who were primarily recording at home and posting their music online. Due to their similar guitar sounds, as well as other musical characteristics like the use of complex, syncopated rhythms, djent broadened as the name for the heavy-metal subgenre prominently featuring the djent guitar sound. Got-djent.com, a forum to discuss the genre was online by 2009.

In 2011, Periphery and other bands associated with the style toured together as The League of Extraordinary Djentlemen. Around this same time, the genre began to garner attention in the mainstream press. The Guardian, for example covered djent in 2011, as did Rolling Stone in 2014. Also in the early 2010s, djent fans began to assess the viability of equipment for making djent music with the question “Does it djent?” The question became a sort of catchphrase and litmus test among djent fans and players. One musician, Rob Scallon, created a choose-your-own adventure style YouTube game titled Does it Djent, about impressing a music producer. In 2016, Ross McMillan created an app called the Djenerator that creates randomly generated djent riffs.

Trying to djent on a cheap les paul is hard
@shauncledera, March, 2018
You can stream "Trembling Creature" below, it's four minutes of great proggy riffs, on-point vocals and a killer breakdown at the end of the track to wrap things up. It certainly passes the "does it djent?" test with a resounding yes.
Robert Pasbani, Metal Injection, March, 2016
ANGRA's trademark formula, a Brazilian style mixed with classical music and heavy metal, is enhanced by different influences such as progressive rock, thrash metal, Latin music, and djent, which transforms the albums into a swirl of modern and familiar.
Blabbermouth.net, March, 2018
SEE MORE EXAMPLES

Djent was first used online in musicians’ forums, but spread into the music culture at large, being covered by musicians’ magazines like Guitar World as well as news outlets like the Guardian.

As noted, djent can name the guitar sound and heavy-metal genre as well as act as a verb for playing in the djent sound.

Some metal fans and musicians debate whether djent should be considered its own genre or whether it should just describe a particular sound or style of heavy-metal guitar playing. A member of the metal band Rosetta replied to a fan question about djent by sarcastically suggesting that doom metal, a subgenre known for its slow tempos, should be imitatively called “DUNNN.”

This is not meant to be a formal definition of djent like most terms we define on Dictionary.com, but is rather an informal word summary that hopefully touches upon the key aspects of the meaning and usage of djent that will help our users expand their word mastery.