What does electric boogaloo mean?

Electric boogaloo is a type of break dancing. There is also a film Breakin 2: Electric Boogaloo, which inspired humorous use of the phrase as a subtitle for an unwanted movie sequel.

Where does electric boogaloo come from? 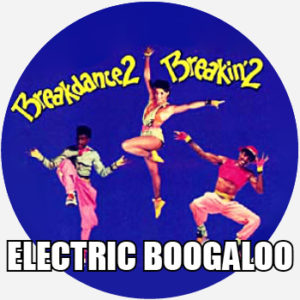 A boogaloo was a popular dance and music style in 1950–60s. Though its exact origins are unclear, it has roots in Latin-American and Southern music culture. R&B legend James Brown once notably performed the boogaloo.

An outgrowth of this dance is the electric boogaloo, a style of break dancing popularized in the 1970s by groups like the Harlem Pop Lockers as well as a dance group called Electric Boogaloo.

The electric boogaloo is still a dance today, but its most common use alludes to the 1984 film Breakin’ 2: Electric Boogaloo, a dance movie immediately pushed out as a sequel to Breakin’ a mere nine months after the original film. Breakin 2: Electric Boogaloo was generally seen as a bizarre production and cash grab, criticized for disregarding the history and culture of the actual electric boogaloo dance. The movie still earned $15 million at the box office and became a cult classic.

In the 1990s and 2000s, people on the internet began using Electric Boogaloo as a mocking subtitle for real or imagined sequels perceived as unnecessary, strange, or just “too much.” For example, in response to a rumor about a sequel to the movie Deliverance, the film website Ain’t It Cool News ran the headline “Deliverance 2: Electric Banjo Boogaloo” to ridicule the silliness of such a sequel. In the 2001, the rock band Five Iron Frenzy embraced the joke, releasing a second album titled Five Iron Frenzy 2: Electric Boogaloo.

In the 2000s, it had become an internet meme to subtitle not only film sequels as Electric Boogaloo but also unwanted metaphorical “sequels” in real life, such as a second tropical storm, the popular revival of a disliked political candidate, a rematch between rival sports teams, or a computer update.

As noted, electric boogaloo is often used in the context of opportunistic “sequel culture” in the entertainment industry. When a movie, book, game, or other art form becomes wildly successful, the producer/publisher sometimes wants to make as many sequels as possible to replicate the original financial success. As the studio pushes out sequel after sequel, often with diminishing quality, fans of the original might become tired of how their favorite property has been overdone. For example, one could say, “I’m so sick of new Terminator movies that they might as well call the next one Terminator 12: Electric Boogaloo.”

As noted, Electric Boogaloo is also used allusively to characterize undesirable returns, reunions, or follow-ups in real life. For instance, if a person named Amber were to get back together with her widely disliked ex, Joe, her friends might groan: “Oh great, here’s Amber and Joe Part II: Electric Boogaloo.”

Outside its use in the movie and memes, the electric boogaloo is used as the name of a dance that requires a great deal of skill.

This is not meant to be a formal definition of electric boogaloo like most terms we define on Dictionary.com, but is rather an informal word summary that hopefully touches upon the key aspects of the meaning and usage of electric boogaloo that will help our users expand their word mastery.