What does Everclear mean?

Tastes just like ’90s alternative rock. Everclear is the brand name of a spirit notorious for its extremely high alcohol content.

Where does Everclear come from? 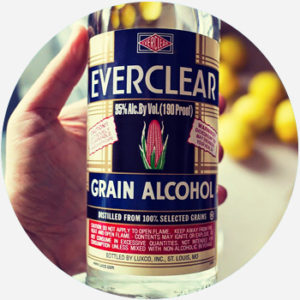 Sold by Luxco, a St. Louis-based liquor company, Everclear is a type of grain alcohol that’s been distilled up to 190-proof, or 95% alcohol by volume (ABV). The brand name was first trademarked in 1950. While the exact recipe is proprietary, corn is Everclear’s principal ingredient.

Other grain spirits, like vodka and rum, typically have 40% ABV. Only Spirytus, a Polish vodka, claims a greater alcohol content than Everclear, at 96% ABV.

Everclear has no color or odor. Its purity—echoed in its very name—has made it a bartender favorite, who use small amounts of the alcohol to mix cocktails and make bitters. The fact that it’s nearly pure alcohol has also made it popular with young partygoers, who have been known to abuse Everclear as a quick path to drunkenness. Its lack of flavor makes it easy to mix into punches (so-called “Jungle Juice”) and jello shots that some drinkers find more palatable. 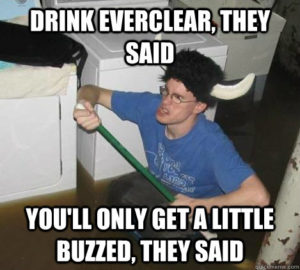 Thanks to its dangerous potency, many US states have variously banned the sale of Everclear. Drinking Everclear has been connected to many instances of violence, sexual assault, and even death. To circumvent some of these bans, Luxco sells a 151-proof (75.5% ABV) Everclear, which, while lower, is still far higher than the average alcoholic beverage.

You might also remember the 1990s alternative rock band, Everclear, best known for their 1995 hit, “Santa Monica.” Who could forget? Everclear frontman Art Alexakis told The Discovering Alcoholic, a leading addiction and recovery blog, that the band named itself after the alcohol. As The Discovering Alcoholic reported: “[Alexakis] said the name came about because of the misleading nature of the clear liquid that looked harmless like water but was actually ‘pure, white evil,’ a good analogy for these three nondescript guys that once uncorked would score three platinum albums.”

when you're trying to take a pic but verse 2 of Santa Monica by Everclear comes on pic.twitter.com/ZZw5BBgy2O

So many bridges to burn, so little everclear to ignite the flames
@TheBudSmoker420, March, 2017
how drunk are you on a scale of one to everclear
@bdgrabinski, March , 2017
Everclear is designed to get you drunk. We're talking stumbling, drooling, ex-girlfriend-texting drunk drunk.
Claire Suddath, TIME Top 10 Ridiculously Strong Drinks, Nov. 16, 2010
SEE MORE EXAMPLES

As a registered trademark, Everclear usually refers to the specific liquor or the band whose name it inspired. However, the term, and its role in youth drinking culture, has yielded some slang. Urban Dictionary, for instance, includes entries on everclearing (a hazing ritual involving Everclear), Everclear Roulette (a drinking game), and evercoke (a mixture of cocaine and Everclear). The spirit’s notoriety has also rendered it a stand-in for intoxication more generally.

This is not meant to be a formal definition of Everclear like most terms we define on Dictionary.com, but is rather an informal word summary that hopefully touches upon the key aspects of the meaning and usage of Everclear that will help our users expand their word mastery.