or farkle or Farkel [fahr-kuh l]

What does Farkle mean?

Farkle has numerous meanings. Known by other names such as Zonk and Wimpout!, Farkle is a dice game in which the goal is to get the highest score on the highest round of play.

A farkle is also the name for a flashy motorcycle accessory.

Where does Farkle come from? 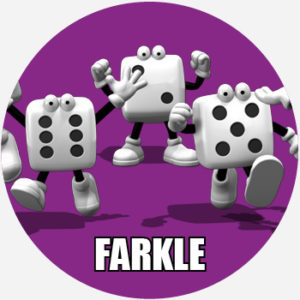 Farkle is played with six dice and no maximum number of players. During gameplay, players roll the dice and score points based on the resulting dice combinations. For instance, rolling three 5s earns you 500 points while a straight of 1–6 lands you 1,500. The first player to accumulate more than 10,000 points, as tallied by a designated score keeper, is then challenged in a final round; if nobody beats their score, they are the winner.

The origins of Farkle are obscure, though various dice-based games reach back into antiquity. However, there are some popular theories, including the 15th-century invention of the game by Sir Albert Farkle in Iceland, or a Texan origin theory based on dice carved out of “Farkleberries.” It is also thought that as a traditional dice game, Farkle was named for an expletive or sound one might make during play.

Farkle has been trademarked numerous times beginning in the 1980s. In 1996, an American couple created a six-dice system, copyrighted the scoring system, and trademarked the name “Farkel.” Originally selling homemade game sets, the game eventually became commercially successful, and today is owned by Legendary Games, Inc.

As a motorcycle accessory, a farkle is named after the combination of “function” and “sparkle.” It has also been interpreted as a backronym of Fancy Accessory, Really Kool, Likely Expensive. Unlike simple decorations, farkles are so-named because they add a dash of glamour to the motorcycle while still remaining useful to the rider. There are several proposed origins of this use of the word farkle. One says it was created by a member of the Honda ST1100 user group, another as an early term for the multiple tail lights that Honda Goldwing riders used in the late 1980–90s that would “flash and sparkle” (thus farkle). The backronym was used in an entry in the online Kawasaki Concours Owners Group forum, found in 1989.

Playing Farkle to prepare for our math test tomorrow!! These kids are soooo smart!
@mzsowder, January, 2018
oh what the farkle! I dont even know what farkle is.... how do people have time to farkle so much that there is a super farkle! Sheesh!
@aberator, November, 2009
The idea is to upgrade your bike in order to improve its capability and style, which can, if one is not careful, become costly. With a little research (and maybe some helpful suggestions here), affordable farkles are within reach! So, make it comfortable. Make it flashy. Make it safe. And make it yours. Enticed? I bet.
Kyra Sacdalan, ADV Pulse, January, 2015
SEE MORE EXAMPLES

Farkle is still played today, with multiple versions available. It is known by many different names, including Wimp Out!, Hot Dice, Zilch, Zonk, among others. Official sets are mass-produced, but a game can also be improvised using nothing but six dice. Farkle is played by the board-gaming community (often younger players in clubs or groups) and by older players who enjoy its simplicity. Avid players sometimes use farkle as a verb (“let’s farkle!”) and scoring zero points on a turn is known as farkling.

In colloquial speech and online forums, motorcycle riders and enthusiasts use farkle for the various gear they buy in stores and online, including lights, mounted seat additions, and GPS systems. Adding such gear to one’s bike is called farkling up.

These farkles should not be confused with Farkle Minkus (Corey Fogelmanis), a character on Girl Meets World (2014–17) and the son of Stuart Minkus, who appeared on the show’s predecessor Boy Meets World (1993–2000).

Finally, many consider farkle a funny-sounding word with a diminutive sound that evokes a few taboo words (fark, fuck). As such, people will occasionally use it as a nonsense word for “tinker” or “putz.” The word also inspired some lesser-known slang meanings. A farkle can be a combination of fart and chuckle, an involuntary fart caused by laughter. It may also refer to a fart that is trapped by clothing and “travels” between the legs to be emitted from beneath the genitals. A farkle can be a red-headed person with pale skin and freckles. To be farkled is sometimes used as a computing term, meaning “very messed up.”

This is not meant to be a formal definition of Farkle like most terms we define on Dictionary.com, but is rather an informal word summary that hopefully touches upon the key aspects of the meaning and usage of Farkle that will help our users expand their word mastery.