What does Fuckface von Clownstick mean?

Fuckface von Clownstick is a derogatory epithet for Donald Trump used by people who are, shall we say, less than fans of the man and president.

Where does Fuckface von Clownstick come from? 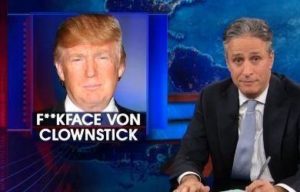 Fuckface von Clownstick was popularized in 2013 following a war of words between Donald Trump and comedian Jon Stewart. Trump accused comedian Jon Stewart of being a “phony” who used a stage name instead of his birth name, Jonathan Leibowitz because he was ashamed of his Jewish “heritage.”

If Jon Stewart is so above it all & legit, why did he change his name from Jonathan Leibowitz? He should be proud of his heritage!

Jon Stewart @TheDailyShow is a total phony –he should cherish his past—not run from it.

Stewart fired back as host on The Daily Show, asking Trump why he wasn’t proud of his Fuckface von Clownstick heritage. Fuckface is a strong insult for a “fool” dating back to the 1960s, von is a signifier of nobility in German surnames and alludes to Trump’s German heritage, and clownstick a mocking nonce word.

Needless to say, Trump was not pleased by his new name and the many people on Twitter who began using it. He was quick to tell the world how he felt about it.

Ultimately, Stewart had the last word in a tweet poking fun at Trump’s perceived thin skin.

We seem to have hit a Fuckface Von Nervestick.

In November 2016, just day’s before the presidential election Trump ended up winning, Stewart gave a performance at the 10th annual Stand Up for Heroes charity event, where he told the story of the Fuckface von Clownstick fight between him and Trump. 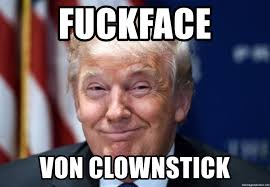 Meme Generator
It's so Huuuuuuuge! (words never spoken by @StormyDaniels in the the presence of fuckface von clownstick.) 😊
@BobertDaniel, November 2018
It took a little longer than expected, but Fuckface von Clownstick has finally weighed in on last night’s Academy Awards. And would it surprise you to hear that he’s making it all about himself?
Alex Young, Consequence of Sound, February 2017
SEE MORE EXAMPLES

Given the vulgarity of the nickname and the fact that it’s widely known Donald Trump hates it, Fuckface von Clownstick is typically used on social media to call out the 45th president for his behavior and policies. The term can also be found as an insulting name for Trump in articles and think pieces in publications open to such sweary takes.

Just an fyi, he also said, "Read my lips: No new taxes" which was a bald-faced lie. Something you know a lot about.

Also, #FuckfaceVonClownstick, you didn't write that shit. You're not capable.

Go back to sorting your son's pardon. 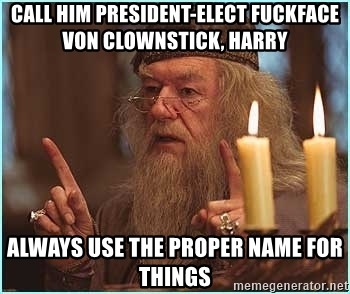