What does Horcrux mean?

A Horcrux is an object formed by dark magic that is used by a wizard or witch in the Harry Potter series. Horcruxes are created to achieve immortality by splitting a dark wizard’s soul into separate pieces.

Where does Horcrux come from? 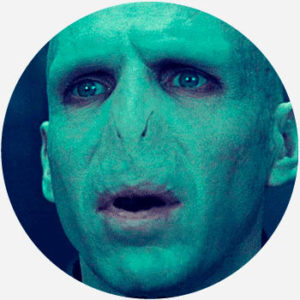 According to series author J.K. Rowling, the invented term Horcrux has no specific etymology, although fans have created their own largely based on the word’s resemblance to the Latin crux, or “cross.” Rowling writes that it was devised by the random “transposition of syllables” during a brainstorming session.

The term was first introduced with the publication of Harry Potter and the Half-Blood Prince in 2005, when Harry learns about Horcruxes from Professor Horace Slughorn, who previously taught the evil Lord Voldemort. In the book, it’s revealed that Voldemort committed a series of murders in order to create seven Horcruxes. The act of murder allowed him to fragment his soul and transfer its essence into objects of significance, like Salazar Slytherin’s Locket or Helga Hufflepuff’s Cup.

This dark magic gave Voldemort immortality as long as his Horcruxes remained safe. Harry Potter and the Deathly Hallows Parts 1 and 2 (2010–11) follow Harry and his friends as they seek out to destroy Voldemort’s Horcruxes.

I’ll believe our love is real when we destroy a horcrux together.
@BIHRLE, February, 2018
The Wizarding World has never seen a Human Horcrux before, and Lord Voldemort has every intention of using his newest weapon to its fullest effect.
KaedeRavensdale (Archive of our Own), Avarice, February, 2018
When a fan asked the Harry Potter author what her Horcrux would be—referring to an object that’s been enchanted by a dark wizard to contain a piece of his or her soul, so the wizard can become immortal—Rowling responded on Twitter that she would never have anything as “evil” or “despicable” as a Horcrux. But if she did, Rowling added, it would be a teabag.
Charlotte Alter, Time, August, 2015
SEE MORE EXAMPLES

While briefly referenced in Harry Potter and the Half-Blood Prince, they become a major plot device in Harry Potter and the Deathly Hallows, frequently used by the series’ protagonists and antagonists. Due to the massive success of all things Harry Potter, Horcrux has entered popular culture as slang for an evil or possessed object. In 2017, former White House aide Steve Bannon, for instance, was roundly mocked as a Horcrux after his oust from President Donald Trump’s inner circle.

Within Harry Potter fandom, new theories concerning the mysterious Horcruxes continue to be proposed and debated. They are featured in fanfiction, and Harry Potter fans sometimes like to imagine what forms real people’s Horcruxes would take.

This is not meant to be a formal definition of Horcrux like most terms we define on Dictionary.com, but is rather an informal word summary that hopefully touches upon the key aspects of the meaning and usage of Horcrux that will help our users expand their word mastery.