Juju on That Beat

What does Juju on That Beat mean?

We want y’all do it, do this dance now:

🎶 JuJu on the beat

JuJu on that beat. 🎶

Juju On That Beat is a 2016 hip-hop song by Zay Hilfigerrr and Zayion McCal. It inspired a massively viral internet meme and dance challenge.

Where does Juju on That Beat come from? 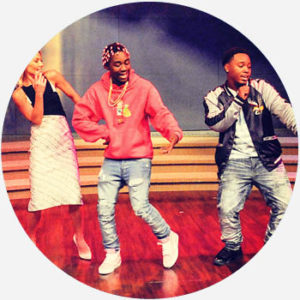 Juju has a variety of meanings. It is the name of a type of guitar and drum-based music among the Yoruba in West Africa. It can refer to a supernatural power or luck caused by a charm or fetish. Since the 1940s, juju has been slang for marijuana.

In their 2016 song “Juju on That Beat,” hip-hop duo Zay Hilfigerrr & Zayion McCall draw on juju‘s associations of being “high” or “enchanted.” Hilfigerrr has explained the slang juju as “like I’m the height…turned up…I don’t care.”

Also known as the TZ Anthem (the two Zs, Zay and Zay), the song was originally created in 2014 when Hilfigerrr freestyled over the beat of Crime Mob’s 2004 track “Knuck if you Buck.” The duo released the song as a single in July, 2016 when they were just 15 years old. Detroit dance duo Fresh the Clown approached Hillfigerrr and McCall about making it a dance challenge—think the Mannequin Challenge or the Harlem Shake.

Later that summer, Fresh the Clown posted a YouTube video where they danced the juju (à la the Whip or Nae Nae). Under the hashtag “#TZAnthemChallenge,” the dance went viral, helping Hillfigerrr and McCall become an overnight sensation and sending “Juju on That Beat” to #5 on the Billboard charts.

Hilfigerrr and McCall appeared on talks shows Live with Kelly and The Ellen DeGeneres Show giving instructions on the dance moves. Zay Hilfigerrr & Zayion McCall released their own music video on November, 2016, which featured volleyball player Hannah Talliere and thrust her into the public spotlight. The video has had over 300-million views on YouTube.

The #TZAnthemChallenge inspired everyday people to post themselves doing the Juju on social media—and celebrities from The Rock to Shaq to LeBron James have also been seen doing the juju.

Some controversy over the use of the song erupted in March, 2017. The Tory Burch shoe company used the song to promote their spring collection. They released an ad showing three white models dancing to Juju on That Beat while wearing their shoes.  Some accused the brand of cultural appropriation as the song was popularized by the young black community.  They soon after removed all the videos from their channels.

Examples of Juju on That Beat

I got 10k views on my #tzanthemchallenge on insta...I'm shook
@basicvalentina_, November, 2016
SEE MORE EXAMPLES

Who uses Juju on That Beat?

People, as is often the case in internet culture, also posted reaction videos to the viral dance trend …

This is not meant to be a formal definition of Juju on That Beat like most terms we define on Dictionary.com, but is rather an informal word summary that hopefully touches upon the key aspects of the meaning and usage of Juju on That Beat that will help our users expand their word mastery.