What does kemosabe mean?

Where does kemosabe come from? 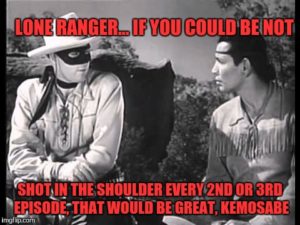 The Lone Ranger first aired on January 30, 1933 on the WXYZ radio station in Detroit, Michigan. In the program, the Lone Ranger and his Native American friend Tonto referred to each other as kemosabe, a friendly term they had shared for years. Kemosabe‘s exact meaning and origin has been a subject of heated debate ever since the program aired.

Tonto, the fictional inventor of kemosabe on the show, was of ambiguous ancestry, though he was sometimes said to be a member of the Potawatomi tribe—a tribe not located in the southwestern United States where The Lone Ranger was set and who do not use kemosabe in their language, though it is apparently meant to sound Native American.

Kemosabe owes its existence to two men, show writer Fran Striker and station producer Jim Jewell. Striker was the one to write kemosabe (originally Kemo Sabay) into the script of the show.

According to Striker’s son, his father used kemosabe to mean “trusty scout” in fan letters and to his children. An early episode of the 1949 TV version of Lone Ranger also defined kemosabe as “trusty scout.”

Kemosabe’s mysterious origin has been a running joke among the Lone Ranger fanbase … yup they’re still out there.

Several actors who have played Tonto over the years have poked fun at the debates. Jay Silverheels, who played Tonto on the 1949 TV version of the program, joked in a 1969 skit with Johnny Carson that Tonto was fired by the Lone Ranger after “him find out what kemosabe mean.” In the 2013 Lone Ranger film, Tonto (played by Johnny Depp) sarcastically claims that kemosabe means “wrong brother.”

Who will Johnny Depp call Kemo Sabe?
The Los Angeles Times (headline), September, 2008
So happy for my kemosabe! :)
@_Ashtrology, April, 2012

Kemosabe has been used frequently in every adaptation of The Lone Ranger and has been popular with fans of the Ranger. 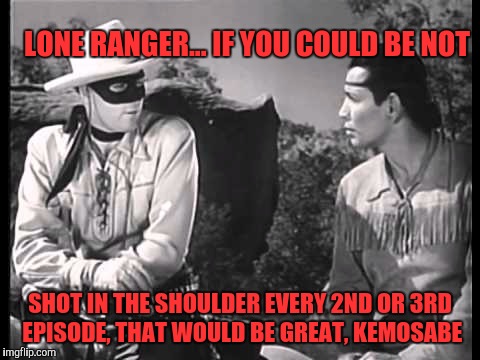 Because of the age and many adaptations of The Lone Ranger, kemosabe has been introduced to multiple generations. Thanks to the 2013 Lone Ranger film, another generation can send tweets to all of their kemosabes.

It’s usually used as a playful, colorful, or ironic way to say “buddy” or “pal” in conversation, often as an attention-getter or to signal concern in a friendly way.

"Justice is what I seek kemosabe" Omg can the 9th hurry up!!

No way kemosabe… this is my house now

This is not meant to be a formal definition of kemosabe like most terms we define on Dictionary.com, but is rather an informal word summary that hopefully touches upon the key aspects of the meaning and usage of kemosabe that will help our users expand their word mastery.