What does mukbang mean?

Starting in South Korea, mukbang is a livestream of a host who binge-eats large quantities of food as they talk to their audience.

Where does mukbang come from? 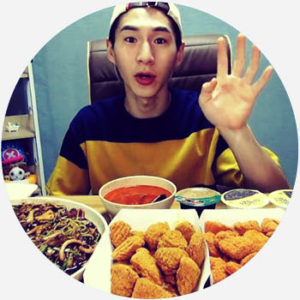 Mukbang—made up of the Korean words for “eating” (meokneun) and “broadcast” (bangsong)—originated in South Korea in the late 2000s–10s. Around this time, a segment on Korean TV variety shows followed guests around as they ate. The trend expanded onto the South Korean streaming site AfreecaTV, where videos of so-called broadcast jockeys, or BJs, before a camera with a table full of indulgent foods became popular.

During a mukbang broadcast, hosts converse with viewers and express their pleasure, giving the impression that they are eating together—creating a social atmosphere very important to eating in Korean culture and which may help explain the popularity of mukbang in an age of digital isolation and social media. Other people may watch mukbang to vicariously enjoy food the viewer might not be able to enjoy themselves, for example due to dieting.

Further popularizing mukbang was a 2011 episode of Anthony Bourdain’s food and travel show No Reservations, where Bourdain participates in a mukbang broadcast. In 2014, CNN featured an article on one of the most popular mukbang broadcasters, BJ The Diva. Some Westerners took to broadcasting mukbang on YouTube, including popular broadcasters Erik TheElectric, Nikocado Avocado, and Wendy of Wendy’s Eating Show. Streaming site Twitch.tv added a “Social Eating” category in June, 2016.

i eat so much that i should just start a mukbang channel
@yellowsugarrr, March, 2018
mukbang, my goodness. the foods in the videos are crazy. that big bowl of ramen though.
@taehyungmdt, November, 2016
The difference is that those who suffer from binge eating as a mental health problem don't feel they have control of their behaviour - but we're not sure whether Trisha Paytas or others who post their Mukbang's to YouTube feel like their eating is uncontrollable.
Clare Stephens, Mamamia, January, 2017
SEE MORE EXAMPLES

Mukbang content can be referred to as mukbang videos, or simply mukbangs. As noted, the hosts of these broadcasts in Korea hold the title of BJ, or broadcast jockey.

A title for a broadcast will often include the type of food being eaten (e.g., Fast Food Mukbang or Crazy Donut Mukbang.) Some mukbangs may also include storytelling from the host, called storytime, also specified in the title (e.g., Mukbang with Storytime). The hashtag “#mukbang” is used on social-media sites such as Twitter to talk about this kind of content.

A derivative of mukbang is cook-bang, which shows a host cooking food for the audience. It may then culminate in a mukbang.

Mukbang is sometimes criticized for the health risks and conspicuous consumption associated with the practice’s binge-eating.

This is not meant to be a formal definition of mukbang like most terms we define on Dictionary.com, but is rather an informal word summary that hopefully touches upon the key aspects of the meaning and usage of mukbang that will help our users expand their word mastery.