What does Murraya mean?

Murraya is the name of a genus of around 15 species of trees that are typically short and bush-like with many leaves and flowers.

On July 8, 2021, Murraya became the winning word in the 2021 Scripps National Spelling Bee when it was correctly spelled by 14-year-old Zaila Avant-garde, who became the first Black speller from the US to win the competition.

Where does Murraya come from? 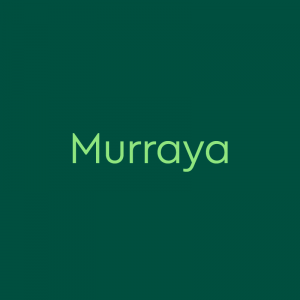 Tree species that belong to the Murraya genus are native to tropical Asia. They are also found in Africa and Australia and are cultivated in many places. The word Murraya comes from New Latin and is named for 18th-century Swedish botanist Johan Andreas Murray (making it an eponym, a word named after a person’s name). Like most genus names, Murraya is usually capitalized and italicized.

The word Murraya gained widespread attention in 2021 when it was the winning word in the 2021 Scripps National Spelling Bee. Zaila Avant-garde of Louisiana spelled it correctly to become the first Black speller from the US to win the competition. The first Black speller to ever win the Bee was Jody-Anne Maxwell of Jamaica, who won in 1998 (she was also the first winner from outside the US).

Over the course of the Bee’s history, the winning words have increased in difficulty as the competition has attracted increasingly skilled spellers. Winning words from past years include stromuhr (2010), cymotrichous (2011), knaidel (2013), and marocain (2017).

The last word, after hundreds of competitors fell to some of the dictionary’s worst verbal terrors, was murraya. When Zaila Avant-garde, 14, spelled it correctly on Thursday night, she put her hands to her head, beamed and twirled, her arms outstretched and confetti raining across the stage.
Maria Cramer, The New York Times, July 9, 2021
White hydrangeas, gardenias, agapanthus, impatiens and iceberg roses were de rigueur, planted among box hedge and Murraya. There's nothing wrong with any of that, but there are other white-flowering plants that will increase your garden's complexity.
Richard Unsworth, The Sydney Morning Herald, February 5, 2019

Murraya is used in the context of botany and arboriculture, but it had a shining moment in 2021 thanks to 14-year-old Zaila Avant-garde, who correctly spelled it to win the 2021 Scripps National Spelling Bee and become the first Black speller from the US to win the competition.

My Murraya are flowering, finally.
Heavenly scent throughout the house. #lovely

This is not meant to be a formal definition of Murraya like most terms we define on Dictionary.com, but is rather an informal word summary that hopefully touches upon the key aspects of the meaning and usage of Murraya that will help our users expand their word mastery.