New Year’s Eve Eve is the day before the final day of the year, or December 30 in the Gregorian calendar.

Where does New Year’s Eve Eve come from? 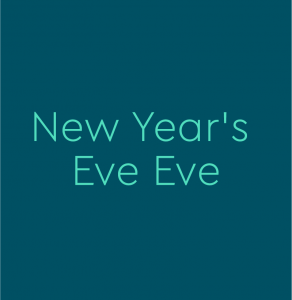 While New Year’s Eve has been evidenced since the 1400s, New Year’s Eve Eve has only been recorded since at least the 1980s. The phrase originates due to the global and long-running popularity of New Year’s Eve, with people busy celebrating—and companies capitalizing on—the festive time between Christmas and New Year’s as students are on break and employees off work or on vacation.

I ain’t hugged my best friend since we both almost died at our New Year’s Eve eve bash lol #goals
@Cobayashiii, March 15, 2018
Those in Las Vegas should book their hotel on New Year’s Eve Eve (December 30) to get the best deal.
Cailey Rizzo, Travel + Leisure, December 21, 2017
As the clock struck 2:18 p.m.—a nod to the coming new year—10,000 brightly colored rubber balls bounced, bounded, and ricocheted as they cascaded from nets hung high above the second-floor balcony at Imagination Station ... Almost immediately, a rush of cheering children swarmed to scoop up the colorful toys. It was the “New Year’s Eve Eve” celebration at the science center downtown on Saturday, which drew families from around the Toledo area to ring in 2018 a little early and see science at work.
Lauren Lindstrom, The Blade, December 30, 2017
SEE MORE EXAMPLES

New Year’s Eve Eve may occasionally be used to refer to Chinese New Year or the Jewish New Year, though this use is less common as these observances often involve traditions that aren’t as associated with drinking and partying like Western New Year’s Eve.

This is not meant to be a formal definition of New Year’s Eve Eve like most terms we define on Dictionary.com, but is rather an informal word summary that hopefully touches upon the key aspects of the meaning and usage of New Year’s Eve Eve that will help our users expand their word mastery.