Feedback
no rest for the wick...
Nutflix

What does nontroversy mean?

A nontroversy is an attempt, often politically or commercially motivated, to cause controversy over something that isn’t contentious, scandalous, or even true.

Where does nontroversy come from? 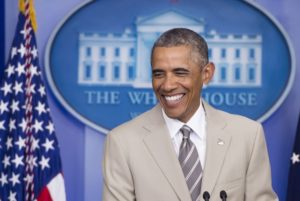 If the media or online commentators are trying to drum up outrage, but there’s no “there” there, it’s probably a nontroversy.

Someone introduced me to the term "nontroversy" to describe "things people are talking and mad about on the internet but no one is actually affected or truly concerned about."

This term is excellent, but I hate that I have to know it.

One early instance of nontroversy comes from an article by longtime sports reporter Tom Keegan that ran in The New York Post on August 24, 1998. Keegan was writing about first baseman Mark McGwire who admitted to taking the steroid androstenedione, at that time not banned by Major League Baseball. The admission caused an uproar, but Keegan said of the debate: “It’s not a controversy; it’s a nontroversy … he is not, repeat, not cheating.”

The nontroversy, as a term and concept, spread in the 2000–10s, perhaps as a result of 24-hour news cycles needing more content along with social media creating more outlets for personal information and outrage.

Multiple entries of nontroversy made it onto the popular slang index, Urban Dictionary, in the late 2000s, showing the term’s spread. And, in 2015, KMFX in Lubbock, Texas applied nontroversy to an excellent example of the term: outcry over Starbucks’s red winter holiday cups, whose lack of explicit Christmas imagery is perennially described as “a war on Christmas.”

If the movie is actually being targeted to give it bad reviews on a metacritic site, shouldn't that tell people to stop using review sites and ask friends or flip a coin and see it for themselves like people used to do? (1/2)

Another notable instance of what has been dubbed a nontroversy came in January 2019, when an anonymous Twitter user posted a video of Democratic congresswoman Alexandria Ocasio-Cortez (AOC) dancing in college. The tweet was meant to smear AOC, whose outspoken liberalism makes her a frequent target of conservative criticism, but it was a clearcut nontroversy. That she danced, that she had fun, portrayed her as human and relatable, only winning her more love. That she danced, that she had fun, also just isn’t a controversy.

Nontroversies, more generally, refer to events that are minor, inconsequential, or downright false—such as 2016’s Pizzagate, an utterly bogus, far-right conspiracy theory claiming Hillary Clinton was running a child sex ring out of a DC pizza parlor. Yeah, that was a thing. Such nontroversies are seen as efforts by political groups to damage their opponents or by media outlets seeking to drive clicks.

I guess if we'd ever seen any of Obama's transcripts I might care two figs for this all fauxtrage & nontroversy.

— No Getting Over Macho Grande Or BREXIT For Theresa (@smitty_one_each) March 6, 2019

If we have to have a debate about old videos of current politicians, thanks to the Ocasio-Cortez dancing non-troversy, then this one is king.
Matt Vespa, Townhall, January, 2019 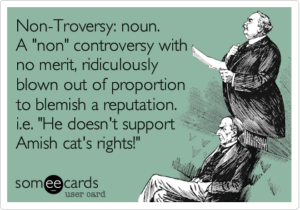 Someecards
I honestly don’t care that much about celebrity culture and thoughts/opinions actors have and preach. I mostly ignore that. Fake drama, clickbait, outrage/nontroversy stuff. ... But I’ll defend/stick up for Brie making some silly comments or Pratt going to a specific church. 🤷‍♂️
@mcox731, March, 2019
SEE MORE EXAMPLES

People use the expression nontroversy to dismiss or express disdain for some supposed drama, especially in contexts of politics and culture.

Like, when Obama wore a tan suit in 2014 and some Republicans criticized him for it not being suitable? That’s a nontroversy. Or, when golfer Rickie Fowler played a round in an untucked Hawaiian shirt and was considered unprofessional? Also a nontroversy.

This is not meant to be a formal definition of nontroversy like most terms we define on Dictionary.com, but is rather an informal word summary that hopefully touches upon the key aspects of the meaning and usage of nontroversy that will help our users expand their word mastery.