What does Occam's razor mean?

Occam’s razor is a philosophical principle that states the simplest explanation is usually the best one.

Where does Occam’s razor come from? 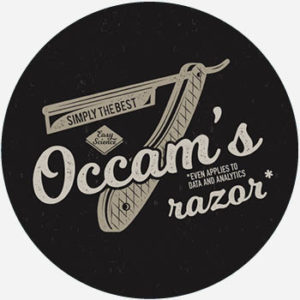 Occam’s razor is grounded in the idea of parsimony—being thrifty with your resources. Just as we all strive to pinch our pennies, Occam’s razor teaches us that we should hold off on our hypotheticals.

The phrase Occam’s razor is recorded in 1852 by the Scottish metaphysician Sir William Hamilton. Hamilton credited William of Ockham, a 14th-century English monk and philosopher, with formulating his namesake, Occam’s razor: “More things should not be used than are necessary.” In other words, when trying to make sense of some phenomenon (especially between two competing alternatives), it’s best to avoid the more elaborate explanation—shave it off, like a razor. 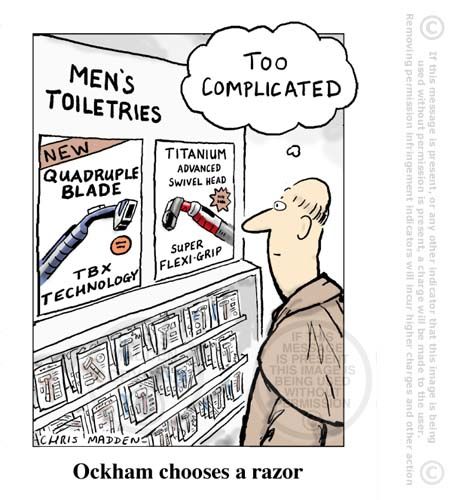 If it looks like a duck, swims like a duck, and quacks like a duck, says Occam’s razor, it’s probably a duck. Not a goose disguised as a duck that infiltrated the flock. Sure, that hypothetical exists. We can’t 100% rule out that it didn’t happen. But c’mon. It’s a duck.

The principle is also commonly applied in modes of reasoning in philosophy, math, and religion—and, of course, The Simpsons in 1994, when Lisa cites Occam’s razor to dismiss some outlandish hypotheticals.

Some critics of Occam’s razor, however, state that the principle is an oversimplification of the complexities of real life and often rules out creative thinking.

We don’t really exist but there’s a lot of stuff buried in the conscious process. It incorporates more data than most libraries, the mystery of life and death are there to those who study. A pity that many educated people have fixed conclusions based on ideas like Occam’s razor.

Occam's razor is cool but it doesn't have Fusion Proglide power with flexball action for that close shave that makes the hoes go wild son
@Teknikally_Jed, June, 2014
With Occam’s Razor inspiring our designs, we can achieve views that are elegant in their simplicity and are all about user speed and efficiency. Something Alexa and her virtual assistance sisters can well appreciate and strive to deliver.
Deb Miller, CMSWire, June, 2018
Going through recent cases on claim construction in preparing a revision of Chisum, Patent Law Digest. Difference between Phillips standard and Broadest Reasonable Interpretation: fuzzy. So, I'm now a fan of PTO proposal to abolish latter for IPRs. Occam's Razor.
@ChisumOnPatents, June, 2018
SEE MORE EXAMPLES

Outside of discussions in science and logic, some people casually cite Occam’s razor as a handy rule of thumb to make sense of life and all its messes.

Occam’s Razor: The simplest explanation is most likely the correct one.

In other words, if it sounds like Scott was texting from Tessa’s phone, that’s probably what happened.

Others apply it more sharply to politics, especially to bust conspiratorial thinking.

Occam’s Razor: the simplest explanation that will account for a circumstance or event is most likely the correct explanation.

Trump is either a Russian agent, or he’s willingly being manipulated by the Russians. Not sure there’s much difference between the two. 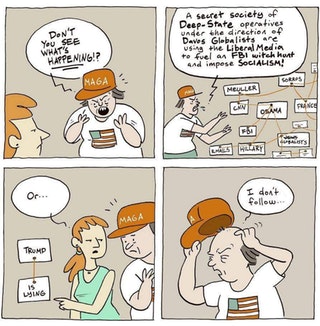 Thanks to its name, Occam’s razor invites plenty of puns:

Detective: after considering all the evidence and analyzing all the possible scenarios, I have concluded that the murder weapon was Occam’s razor!

William of Occam: no, it can’t be me. There must be a simpler explanation!

This is not meant to be a formal definition of Occam’s razor like most terms we define on Dictionary.com, but is rather an informal word summary that hopefully touches upon the key aspects of the meaning and usage of Occam’s razor that will help our users expand their word mastery.