What does paleo diet mean?

The paleo diet is a diet based on foods which adherents presume were available to Paleolithic humans. This often includes low grain consumption and high intake of protein and vegetables.

Where does paleo diet come from? 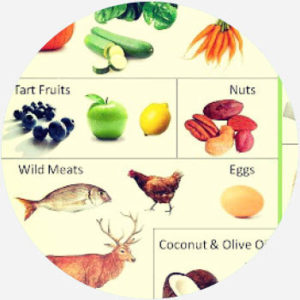 Paleo diet is a shortened version of Paleolithic diet, and is also called the caveman diet or the stone-age diet. According to the paleo diet movement, Paleolithic humans—who lived in what we commonly call the Stone Age, a period roughly 2.5 million years ago up to about 10,000 b.c.—were healthier because they ate foods they evolved to eat, whereas modern humans eat foods their systems are not adapted to (e.g., sugary, processed foods).

The concept of consuming a diet based on what Paleolithic humans ate was first promoted by Walter L. Voegtlin in his 1975 book The Stone Age Diet. He suggested that there’d been little genetic change in human digestion since the Paleolithic era and yet large changes in human diet, much to the detriment of human health.

The man responsible for the more recent popularity of the paleo diet, however, is Loren Cordain. His 2002 book The Paleo Diet popularized the diet’s most common name and helped it become the nutritional phenomenon it is today. The thesis of the book was, again, that our digestive systems have changed very little since the stone age, and so we should eat like our ancestors ate if we want to be healthy.

“Hunting and gathering for chocolate doesn't make it a Paleo diet. ”
Mike C @mclansey Twitter (April 3, 2017)
“How much protein is ideal on a Paleo diet? Lots of people play around with fat and carb ratios but protein is often neglected.”
The Curious Coconut Facebook (April 13, 2017)
“No, when people twirl long green strings of zucchini on their forks, pasta probably will be on the minds of all but the strictest Paleo diet adherents”
Maura Judkis, “Vegetable stand-ins for carbs have hit the mainstream,” Stuff (October 25, 2016)
SEE MORE EXAMPLES

Although the paleo diet has become a popular health movement, not everyone agrees with its central tenants. For one thing, the British Dietary Association notes that the paleo diet can cause a deficiency in calcium thanks to the fact that many versions advise cutting out dairy.

Some also contend that the paleo diet offers an inaccurate picture of what Paleolithic humans ate. Many foods, opponents argue, that we eat today aren’t at all like the foods that hunter-gatherers ate during the Stone Age; even fruits, vegetables, nuts, and meats, mainstays of the paleo diet, have been transformed by agriculture and modern food production. Also, opponents continue, it’s quite difficult to deduce exactly what our ancestors ate. Humans living in different places most likely ate different things based on what was available, which makes defining a single paleo diet difficult. These objections, coupled with limited evidence supporting the health benefits of the diet, have made the paleo diet the center of some controversy. Still the diet trend has made many people more conscious of their food choices.

People who are trying the paleo diet will commonly say they are “going paleo” and some restaurants will advertise they offer “paleo-friendly” dishes. Paleo also functions a modifier, e.g., “a paleo approach to cooking” or “paleo brownies.”

This is not meant to be a formal definition of paleo diet like most terms we define on Dictionary.com, but is rather an informal word summary that hopefully touches upon the key aspects of the meaning and usage of paleo diet that will help our users expand their word mastery.