What does pickleball mean?

Pickleball is a game that combines aspects of tennis, table tennis (Ping-Pong), and badminton. It’s known to be a fun, easy-to-learn, low-intensity game that can be played by people of a wide range of ages and abilities.

ball is life, sportsball, Rookie of the Year, G.O.A.T.

Where does pickleball come from? 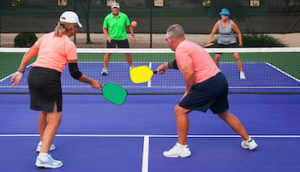 Pickleball is played with a small paddle (resembling a table tennis paddle), with which two or four players hit a perforated plastic ball (like a Wiffle ball) over a low net (as in tennis) on opposite sides of a small court (similar to the size used in badminton). Held indoors or outdoors, the game is played much like badminton—and looks a lot like table tennis, but bigger.

According to the USA Pickleball Association (USAPA), pickleball was invented in 1965 on Bainbridge Island (just off Seattle, Washington) at the home of former Congressman Joel Pritchard. Pritchard and neighbors Bill Bell and Barney McCallum are credited as the three inventors of the game.

Pritchard’s children played the first, unofficial game of pickleball with table tennis rackets and a large plastic ball on a badminton court. After the adults discovered, to their delight, what the children were doing, a new game was created that all members of the family could play together. According to McCallum, the game was adjusted based on the space limitations and sports equipment available at the time.

The person credited with coming up with the name pickleball is Joel Pritchard’s wife, Joan Pritchard. There are two origin stories behind Joan’s name. Joan claimed that the name was inspired by pickle boats, rowed by the hodgepodge of people not chosen for other boats in a crew, similar to how pickleball uses equipment from several different games. Barney McCallum and several of the children maintained that Joan got the name from the Pritchard’s family dog, Pickles.

In 1966, the Pritchard pickleball crew settled on the rules of the game. According to McCallum, the most important factor when deciding the rules was not giving any player a competitive advantage, based on size or other physical attributes, and keeping the game fun and accessible. The first pickleball court was built in Pritchard’s neighbor’s yard in 1967.

The game spread throughout Washington state over the next decade. The USAPA notes that the first recognized pickleball tournament was held in 1976. The first official rulebook was also published in March that year. By 1990, pickleball was being played in all 50 states. In 2005, the USAPA was established to promote pickleball nationally.

Fridays are more fun with friends. Join in the fun playing pickleball at the Y.
@YMCA_Milwaukee, October 2019
... pickleball is a great family sport, too. The father of twin nine-year olds, [Rocky Brown] loves getting the entire family out on the court.
Amanda Loudin, NBC, 2019
The name is fun and so is the game! Pickleball is breaking down stereotypes while its popularity goes up thanks to @sfapickleball and a plethora of devoted fans!
@MidcoSN, September 2019
SEE MORE EXAMPLES

Pickleball can refer to the game as well as the ball used in it.

The game, which many claim to be the fastest growing sport in the US, is popular due to its simple rules and its accessibility to people of all ages and abilities, including younger and older people who may not be able to play tennis or badminton.

Linda was an absolute champion during our Boot-Pledge-Pledge canvass today. Both on the pickleball court and at the doors, we are a fearsome inter-generational pair! #IAforPete #WinTheEra pic.twitter.com/1UJ3cnvaS1

This is not meant to be a formal definition of pickleball like most terms we define on Dictionary.com, but is rather an informal word summary that hopefully touches upon the key aspects of the meaning and usage of pickleball that will help our users expand their word mastery.