Where does Rapinoeing come from? 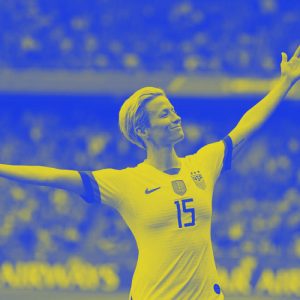 The US Women’s National Soccer Team had a big year in 2019. The team was the champions at the 2019 Women’s World Cup. Megan Rapinoe was co-captain of the squad, and she became known for a pose she would strike after scoring her (many, many) goals. For this pose, Rapinoe tilts her head back, so her chest is more puffed out, and outstretches her arms. Often, Rapinoe leans back slightly and raises her left arm higher than her right.

This is one of my favorite sports pictures of this decade. Thanks for being such an inspiration to my daughter @mPinoe – you were unbelievable today. pic.twitter.com/iMI9TGb1PT

Press coverage and social media about Rapinoe, her stunning performance, and her signature pose gave rise to the term Rapinoeing—and many imitations and celebrations of the pose, both earnest and playful. One of the firsts instances of the term rapinoeing appeared on Twitter in June 2019.

The term Rapinoeing spread after the US women’s team won the World Cup in July 2019. It was also boosted by Rapinoe’s activism, including her fight for equal pay—not to mention after the soccer star was named Sports Illustrated‘s 2019 Sportsperson of the Year.

Me #rapinoeing my joy at the bowling alley. Yes, that guy in the next lane is wearing a NRA cap ...
@ShayLavin, June 2019
I don’t like folks who force personal agendas. Don’t like folks openly opposing same sex marriage, don’t like Kap kneeling, don’t like Rapinoe Rapinoeing, don’t like The Golden Calf of Bristol Tebowing. All personal beliefs and political agendas should be kept out of your sport.
Swaggasaurus (username), Carolina Huddle (forum), July 2019

Rapinoeing is as much an ode to Megan Rapinoe herself as it is a celebration of a success. Rapinoe has been an outspoken critic of Donald Trump’s civil rights policies, which she said excluded members of the LGBTQ community (to which she belongs) and other marginalized groups.

She is also a staunch supporter of gender equality, often speaking out against the pay gap between men and women in her sport. Those who resonated with her activism began Rapinoeing to support her.

Rapinoe has been criticized for the pose, with opponents saying it shows poor sportsmanship. In response, her supporters point to the fact that this criticism is rarely given to her male counterparts who do the same, or similar, things. Rapinoeing then caught on as way to act in defiance of sexism.

Of course, we all love to celebrate our own victories. Soccer players, other athletes, and people in general may show triumph or joy, over wins big and small, by rapinoeing.

This is not meant to be a formal definition of Rapinoeing like most terms we define on Dictionary.com, but is rather an informal word summary that hopefully touches upon the key aspects of the meaning and usage of Rapinoeing that will help our users expand their word mastery.