What does semicolon tattoo mean?

A semicolon tattoo is a tattoo of the semicolon punctuation mark (;) used as a message of affirmation and solidarity against suicide, depression, addiction, and other mental health issues.

Warning: This article deals with the sensitive topic of suicide. If you (or anyone you know) are thinking about attempting suicide, please call the toll-free, 24/7 National Suicide Prevention Lifeline at 1-800-273-8255.

Where does semicolon tattoo come from? 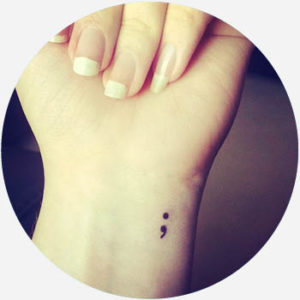 The semicolon tattoo was popularized by Amy Bleuel. Having struggled with depression, addiction, and difficult personal circumstances, particularly after being raped and her father died by suicide, she wanted something to commemorate her survival. In 2013, she founded the faith-based nonprofit Project Semicolon, which chose a semicolon as a symbol because it’s “used when an author could’ve chosen to end their sentence, but chose not to. The author is you and the sentence is your life.”

Project Semicolon is dedicated to the prevention of suicide through raising public awareness of depression and equipping communities and individuals with tools to promote mental health. As of April 2017, the organization states it has helped over 5.2 million people since its founding.

My mom told me she knew I was planning on getting a semicolon tattoo, and she was wanting to get one too (not exactly the same but similar).
Fiochag Reddit (October 18, 2015)
Since getting the semicolon tattoo I've talked to dozens of friends and strangers about life and survival stories alike. Humbling for sure.
Bernie Kropp @Mister_JLister Twitter (April 3, 2017)
She also runs a suicide awareness campaign with her truck. She has the symbolic semicolon tattoo painted on the side.
Misty Inglet, “Monster truck driver advocates for child abuse prevention,” KIFI-TV Local 8 News (March 31, 2017)
SEE MORE EXAMPLES

People get semicolon tattoos to represent their own struggles with—and victories over, ongoing as they can be—suicide, or to express solidarity for those suffering with mental health issues. Hopeful and inspirational, the tattoo is often subtle, like a semicolon behind the ear or on the wrist, though many have larger, more elaborate designs incorporating the semicolon punctuation mark. The semicolon tattoo also takes other symbolic, non-tattoo forms, printed, for example, on t-shirts or fashioned as pendants.

The mental health meaning of the semicolon tattoo received another boost of attention when the 2017 Netflix series 13 Reasons Why, based on a 2007 young adult novel by Jay Asher centering on the suicide of a high school student, debuted. Three of the people involved with the project got the semicolon tattoo, including superstar Selena Gomez, an executive producer of the adaptation.

Aside from the emergence of Project Semicolon, semicolon tattoos are used by people with Crohn’s disease to represent their community. The logic is that someone with Crohn’s disease or a similar condition might quite literally have a semi-colon, as sometimes part of the intestinal colon has to be removed to treat it.

There are also semicolon tattoos that have nothing to do with either Crohn’s disease or mental health issues, so it’s best not to assume anything about someone’s life based on their tattoo choice. They might just be passionate about semicolons.

This is not meant to be a formal definition of semicolon tattoo like most terms we define on Dictionary.com, but is rather an informal word summary that hopefully touches upon the key aspects of the meaning and usage of semicolon tattoo that will help our users expand their word mastery.