What does standard issue mean?

Standard issue is a synonym for typical, generic, or baseline, often used with government or military connotations.

Where does standard issue come from? 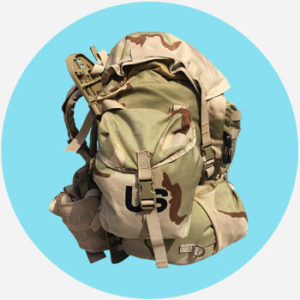 Standard issue dates back to at least 1888, used to describe the standard issue diet of fat, pork, sugar, and coffee given to soldiers. The phrase takes off, however, in the early 1900s, when the US government began widely using the term.

In its more specific and common military sense, standard issue refers to equipment, particularly machinery, weaponry, and clothing, that a US service-person might need in the line of duty.

By the 1950–60s, standard issue crossed over into civilian life. Users took the idea of the government providing the same equipment to all service-people and generalized it to other areas of life. Anything that was typical, conventional, or expected for everyone to have was standard issue. For example, elementary school children carrying the same textbooks could be said to be carrying standard-issue books, or families in the 1950s could be described as having the standard-issue, statistical average of 2.5 children.

to all non-canadians, every canadian citizen is equipped with a standard issue compass, large tim hortons coffee, and a beaver upon entry
@basedaftbh, November, 2017
The current [Basic Combat Training] involves a three-stage process, the first of which is the “Red Phase.” Comprising the first three weeks of training, it's where recruits begin to learn drills and ceremonies, the seven “Army Core Values, unarmed combat and first aid. Recruits are also introduced to standard-issue weapons like the M-16 assault rifle and M-4 carbine.
Andrew O'Reilly, Fox News, March, 2018
There’s something oddly vital and compelling about the ironically titled “Boy Band,” by Chelsea rockers Pillbook...Its music is heavy and sometimes viscerally gloomy rather than bright and poppy, and while your standard-issue boy band comes with an almost mechanical sort of precision, there’s a ramshackle quality here that has the listener white-knuckling through the brisk...EP.
Victor D. Infante, Telegram.com, March, 2018
SEE MORE EXAMPLES

The military or government connotation of standard issue survives into contemporary usage. Though it is less common to find the term in official government documents or conversation, civilian publications still use standard issue to refer to basic specialized equipment provided to service-people in the armed forces and law enforcement. Standard issue is especially associated with guns, such as the service rifle, often called the standard-issue rifle.

More broadly, standard issue has come to serve as a synonym for typical or conventional, even stereotypical when used in disparaging or comical contexts (e.g., tweed jackets are standard issue for the newly minted English professor).

The term is often used to brush off a person or experience as ordinary or expected. The term also often carries a negative connotation when used to refer to someone else’s intelligence or character. For instance, someone in a political disagreement could call their opponent a standard-issue member of the opposing political party, implying that everyone in that party doesn’t think.

Many companies and brands have adopted the term standard issue for basic or beginner-level products and services (e.g., that car model is standard issue, but you can upgrade the electronics).

This is not meant to be a formal definition of standard issue like most terms we define on Dictionary.com, but is rather an informal word summary that hopefully touches upon the key aspects of the meaning and usage of standard issue that will help our users expand their word mastery.