What is The American Dream?

The American Dream is the aspirational belief in the US that all individuals are entitled to the opportunity for success and upward social mobility through hard work.

Where does The American Dream come from? 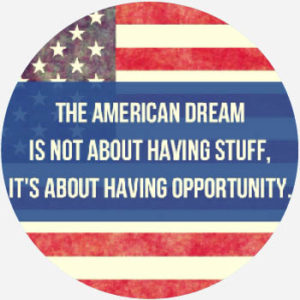 We can anchor the underlying philosophy of The American Dream in the founding documents of the United States, such as the 1776 Declaration of Independence: “We hold these truths to be self-evident, that all men are created equal, that they are endowed by their Creator with certain unalienable Rights, that among these are Life, Liberty and the pursuit of Happiness.” We can also locate the spirit of the American Dream in seminal studies of the American experience, like Alexis de Tocqueville’s 1835 Democracy in America, where he describes “the charm of anticipated success.”

The specific phrase, however, emerges in the early 20th century. One of the earliest instances, in David Graham Phillips’s 1910s novel Susan Lenox, characterizes fashion and home magazines as promising a “rise of fortune” that is “the universal American dream and hope.” A 1916 article in The Chicago Tribune also speaks of fighting for “the American idea, the American hope, the American dream…”.

It was historian James Truslow Adams, however, who cemented the concept and phrase: The American Dream. In the preface to his book The Epic of America, Adams wrote of “the American dream, that dream of a land in which life should be better and richer and fuller for everyone, with opportunity for each according to ability or achievement.” The instant popularity of the term The American Dream may well be attributed in no small way to the timing of its coinage—in the midst of the Great Depression, his phrase that encapsulated the vision that anyone could rise above adverse circumstances through dedication was a hopeful note.

Martin Luther King Jr.’s 1963 “I Have a Dream” speech alludes to The American Dream with respect to racial inequality in the US, joining the literature of The American dream that helped define the nation.

Examples of The American Dream

The ‘American dream’ is increasingly out of reach, as social mobility declines and fewer children face a better future than their parents.
Steven H Woolf & Laudan Aron, Failing health of the United States, February, 2018
‘my grandparents came here with $15 and opened a bakery business.’ cool story. mine have been here since 1700 working for free and not allowed to open a gotdamn thing. i'm glad the american dream worked out for you.
@AmeriKraut, January, 2018
Carlos Campos arrived in the United States alone at age 13 and without papers, after nine months of walking and hitchhiking across three countries. Three decades later, Campos -- a fashion designer known for his elegant, perfectly tailored menswear -- is living the American dream, proudly showing off his latest collection at New York Fashion Week.
Laura Bonilla, AFP, February, 2018
SEE MORE EXAMPLES

Who uses The American Dream?

The phrase The American Dream is so commonplace today as to have become clichéd. It is often used in book titles, news articles, politics, and popular culture to loosely refer to the core American ideals.

This is not meant to be a formal definition of The American Dream like most terms we define on Dictionary.com, but is rather an informal word summary that hopefully touches upon the key aspects of the meaning and usage of The American Dream that will help our users expand their word mastery.