Feedback
The Aristocrats
the Biles

What does the Arya Challenge mean?

The Arya Challenge is an internet trend where people imitate a skilled, lethal knife jab by the character Arya Stark on the popular television show Game of Thrones. (Of course, don’t go imitating this with knives or other dangerous objects, folks.)

Where does the Arya Challenge come from? 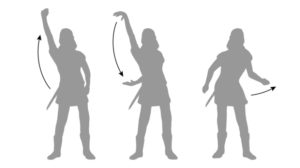 An independent, tenacious, righteous master fighter? That sounds like Arya Stark (played by Maisie Williams), one of the most widely admired characters on Game of Thrones. Arya cemented her beloved status after spectacularly slaying the nearly unstoppable Night King, who commanded an army of the undead threatening to take over their fictional world. 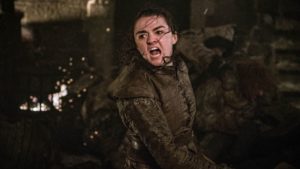 On Episode 3, Season 8 (April 28, 2019) of the HBO adaptation of George R.R. Martin’s fantasy series, the Night King is holding up Arya by the throat, a squeeze away from killing her. It looks grim for our hero, until she drops her knife—a storied blade of Valyrian steel—from one hand, catches it in the other, and stabs him in the stomach. (All in slo-mo, of course.) The Night King shatters into millions of pieces. So does his zombie army. Arya saves the day.

Shortly after the episode first aired, Arya’s badassery (how else can we put it?) inspired Twitter users, notably @KremPuff and @GBDRN, to record and post imitations of Arya’s knife move as if it were a dance. They dubbed it #TheArya.

Twitter users were inspired to record their own versions of the the Arya, and the internet trend was dubbed the Arya Challenge. Interpretations came to incorporate all kinds of props for the knife, from lacrosse sticks to cell phones to hairbrushes to keys. By early May, the trend was receiving coverage in major media outlets like Time and CNN.

Examples of the Arya Challenge

GOT is so good that I was doing the Arya challenge in the shower with a bar of soap.
@GM_Populair93_, May 2019
Opening your car, brushing your hair — they seem like normal everyday activities, but not with the Arya challenge.
Chloe Wilt, Revelist, May 3, 2019 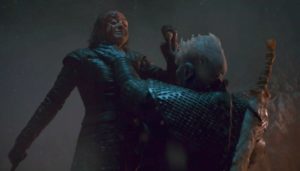 Who uses the Arya Challenge?

The expression the Arya Challenge is used to describe people doing the Arya and posting it on Twitter or social media. Both are often hashtagged as #AryaChallenge or #TheArya.

I may not be a faceless man, but come see us at Legacy forge at the Tennessee Ren fest and I can arm you like a Stark! #TheArya #NotToday #Arya #Aryachallenge #GameofThrones #RenFest pic.twitter.com/8JSmZHX8X7

Sometimes people slow down their Arya to mimic the slow motion of the original scene or muse about various creative props.

wanna do #TheArya with a chicken doner wrap

Pictures of Arya Stark and her actor, Maisie Williams, are also incorporated into references to the Arya Challenge.

This is not meant to be a formal definition of the Arya Challenge like most terms we define on Dictionary.com, but is rather an informal word summary that hopefully touches upon the key aspects of the meaning and usage of the Arya Challenge that will help our users expand their word mastery.