Everything After Z by Dictionary.com
Previous Word the Wadsworth Consta...
Next Word tin roof, rusted

What does third eye mean?

The third eye can refer to a supposed site of mystical powers, mystical vision, or a wise and enlightened perception of reality. It is traditionally located in the forehead according to spiritual practitioners.

When ur third eye opens and you realize the news is just propaganda
@vivianwithnail, February, 2018
Shirodhara as a healing technique involves gently massaging the head and a slow stream of warm oil being poured on the forehead, where the ‘third eye’ (the anja chakra) is believed positioned.
Khetsirin Pholdhampalit, The Nation (Thailand), January, 2018
It’s like they can’t grasp the first thing about concentrating their third-eye energy in the hakini mudra pose to generate the swirling sublime ball of the energy blast. Boy, they’ve really got their work cut out for them if they want to have any hope of levitating by next week.
The Onion, November, 2017
SEE MORE EXAMPLES

Where does third eye come from? 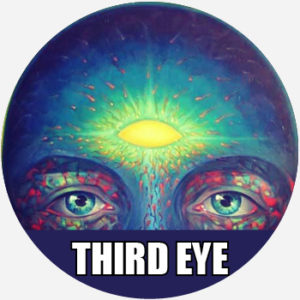 One of the most powerful and important gods in Hinduism, Shiva is referred to as Tryambaka, or “the three eyed one” in the Rig Veda, a Hindu scripture from around 1500 BCE. In visual art, Shiva is often depicted with a third eye, and his worshippers believe he uses the third eye to manifest his powers. In the Sanskrit epic poem the Mahabarata, Shiva reduces Kama, the god of desire, into ashes with his third eye. Allegorically, this connects the third eye with wisdom and enlightenment—Shiva possesses the power to destroy the universe in order to recreate it.

The story of Shiva and Kama was recounted in English history of India as early as 1798. In the early 19th century, others including academics and missionaries, wrote in English of Shiva and his third eye. An 1821 letter attributes to Shiva’s third eye the power to see past, present, and future.

Later in the 19th century, Russian occultist Helena Petrovna Blavatsky, who founded the Theosophical Society, claimed that the third eye was a non-physical capacity for “inner vision” possessed by humanity’s ancestors. Blavatsky associated the third eye with the pineal gland, an association still made by many in the New Age community today. In 1893 an article in a Calcutta-based Theosophical journal connected the third eye with one of the chakras, spiritual energy centers in the body in Hindu tradition. Here, the third eye was specifically connected to the Ajna or Aina chakra, located in the forehead, as evidenced in English texts from Indian authors, including Sri Aurobindo, through the early 20th century.

Daisetz Teitaro Suzuki, a Japanese scholar of Zen Buddhism, described in 1961 the overcoming of ignorance as opening the third eye. Five years later, The Atlantic explored the connections between the third eye, chakras, the pineal gland, and new states of consciousness in an article titled “LSD and the Third Eye.” Third eye has also permeated more recent popular culture (e.g., San Francisco rock band, Third Eye Blind, who formed in 1993).

Third eye is used by yogis, the New Age movement, and other spiritual practitioners to refer to the chakra and the spiritual vision it confers. References to the third eye and its supposed powers may also be used to poke fun at yogis and new agers over mystical beliefs.

The idea of opening your third eye is also used in the general population to refer to achieving a new and clearer vision of reality, just as using or seeing with one’s third eye is an allusive shorthand for “intuition or insight.” This new perception is sometimes associated with the use of psychedelic drugs.

Be aware that the third eye is sometimes used as vulgar slang for “the anus.”

This is not meant to be a formal definition of third eye like most terms we define on Dictionary.com, but is rather an informal word summary that hopefully touches upon the key aspects of the meaning and usage of third eye that will help our users expand their word mastery.