Treyway was popularized as a catchphrase of rapper 6ix9ine. The term is associated with his former music manager Shotti and the Nine Trey Gangsters gang.

Where does Treyway come from? 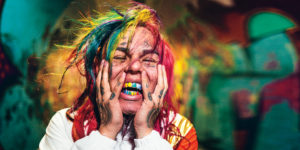 Treyway (stylized as Tr3yway) is credited to Kifano “Shotti” Jordan, a former manager of rapper 6ix9ine (Daniel Hernandez, also known as Tekashi69). Shotti and 6ix9ine are affiliated with the Nine Trey Gangsters, a New York City/East Coast subset of the Bloods. They were founded in 1993, with ’93 apparently alluded to in Nine Trey (trey as three).

Shotti used Treyway when he founded Tr3way Entertainment, which represented 6ix9ine until he parted ways in 2018. Shotti, his associates (including 6ix9ine and others affiliated with Nine Trey Gangsters), and their scene/”way of life” have referred to themselves as and been referred to as Treyway. For instance, on 6ix9ine’s 2018 track “Blood Walk,” Shotti raps:

This is that Black Wall Street
That bad-ass motivation
That Nine Trey gangster shit, baby
This is TR3YWAY

Treyway saw popular attention thanks to 6ix9ine, who also began using Treyway in his music and on social media in 2018 as a shoutout to Shotti and the Nine Trey Gangsters.

After a long investigation, both 6ix9ine, Shotti, and other Treyway affiliates were arrested on charges of criminal activity, including racketeering, in November 2018. Around this time, 6ix9ine and Shotti had a falling out. And, after their arrests, 6ix9ine’s album “Dummy Boy” was released … which noticeably featured no references to Treyway, with the exception of “FEFE” featuring Nicki Minaj. That track, which opens with a much-cited “It’s fuckin’ TR3WAY!”  was released prior to his arrest.

Both men pleaded guilty to charges and were sentenced to prison in 2019. In March 2019, according to XXL hip-hop news, Shotti criticized his former collaborator for “breaking every code” and added “Treyway still stands strong. I want that to be known.”

You can find Treyway being used as shout-out/ad lib on music by 6ix9ine, Shotti, and artists associated with them. It’s closely associated as an identifier and kind of brand for the Nine Trey Gangsters. Fans of 6ix9ine may also use Treyway in reference to the artist or his music.

everybody was treyway bloods till 6ix9ine got locked, blueface came out, everybody crip.

Tekashi to the judge: pic.twitter.com/GsyW24MzWN

This is not meant to be a formal definition of Treyway like most terms we define on Dictionary.com, but is rather an informal word summary that hopefully touches upon the key aspects of the meaning and usage of Treyway that will help our users expand their word mastery.