What does true or false mean?

True or false is variously said of something that must be considered as correct (true) or incorrect (false).

Where does true or false come from? 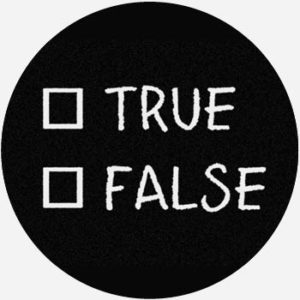 On their own, the words true and false can be found in the earliest days of English. The first appearance of the phrase true or false, however, is tricky to pin down, but one notable early instance comes in Enlightenment-era analytic philosophy texts.

True or false also figures prominently in logic, where propositions are assigned truth values of true or false. This principle has notably been adopted in Boolean algebra, which assigns true a value of 1 and false 0, and it is essential to the development of computer science in the 20th-century.

The determination of whether something is true or false has been used as an examination question since at least the early 1900s, requiring the test-taker to determine whether a given statement is true or false to demonstrate their understanding of the content. True or false questions, quizzes, or full tests became more common in the 1950–60s.

Thanks to its widespread use on school exams from elementary school through college, true or false has since spread into popular speech and writing. One can even play a trivia game, True or False, with their Amazon Alexa smart speaker.

Examples of true or false

True or False: Devin Booker's 70 point game should be celebrated even though they lost
@SLAMonline, March, 2018
We investigated the spread of all of the verified news stories–verified as either true or false–distributed on Twitter from 2006 to 2017.
MIT Laboratory for Social Machines, March, 2018
My philosophy prof just tried to get us to agree to a test that would consist of one true or false question and would equal 100% of our final grade. Strange thing is that THESE PEOPLE HAD TO THINK ABOUT IT. THEY ALMOST SAID YES TO THIS CRAZINESS. #nothankyou
@futuremrsbever, March, 2018
SEE MORE EXAMPLES

Who uses true or false?

True or false typically describes a question or test format in school settings, often presented as true/false or T/F. True or false is also widely used in the study and practice of formal logic, Boolean algebra, and computer programming. The rise of fake news in 2016 has also seen a spike of the phrase true or false in the popular, professional, and academic discussion of truth and fiction in online news and social media.

Its familiarity in schools has helped spread true or false as a statement introducing or punctuating colloquial speech or popular writing. For instance, we may confront a spouse we think is having an affair with “You are cheating on me. True or false?” This use of true or false forces a respondent to commit to an answer. True or false can also be used for humorous effect (e.g., “True or false: I just ate the last slice of pizza,” perhaps said as a playful admission that one has, in fact, eaten it).

True or false is also used in catchy media headlines to explore ambiguities and misconceptions about some particular topic. For instance, in 2003 the Smithsonian magazine online ran an article: “True or False? Extinction Is Forever” while a 2018 Vox magazine story ran an article “True or false: The myths and realities of documentary film.”

The common phrase has become familiar enough to be casually referenced in the names of popular works, from books to film festivals to songs, such as hip-hop artist Lil Durk’s 2017 “True or False.”

This is not meant to be a formal definition of true or false like most terms we define on Dictionary.com, but is rather an informal word summary that hopefully touches upon the key aspects of the meaning and usage of true or false that will help our users expand their word mastery.