What are the X Games?

X Games is the name of an event involving multiple competitions in what are often called extreme sports or action sports—things like skateboarding, snowboarding, and motocross, among many others.

Much like the Olympic Games, which also feature a range of different athletic competitions, there are Summer X Games (primarily featuring sports suited for warm weather) and Winter X Games (featuring winter sports).

⚡️When are the X Games?

The X Games are typically held twice a year—once in summer (Summer X Games) and once in winter (Winter X Games).

The Winter X Games typically start during the fourth week in January and the Summer X Games are most often held sometime between late June and mid-July (though they have also been held in August). Both events typically last around four days.

Where does X Games come from? 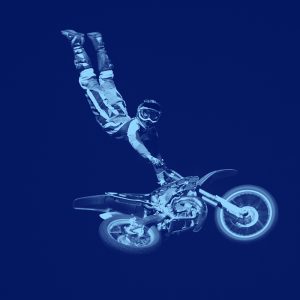 The X Games brand is part of sports media company ESPN, which often televises the events. The event that became the X Games was first held by ESPN in 1995 as the Extreme Games. Events included skateboarding, BMX biking, in-line skating, street luge, bungee jumping, and a mix of water sports. The first Winter X Games were held two years later in 1997, featuring events like snowboarding and ice climbing.

Like the Olympics, the X Games awards the top three finishers in each event a medal: gold for first place, silver for second, and bronze for third.

The Summer and Winter X Games are sometimes informally referred to as Summer X and Winter X, as in I’m always stoked to compete at Summer X.

Only 2 weeks away from @xgames. Here’s a throwback to my first X Games medal in 2006. #bronzemedal #snocross
@RossMartin837, January 12, 2017
Since she first competed in X Games Aspen slopestyle at the age of 15 in 2006, Anderson has been podium perfect every year, eyeing her 16th slopestyle medal in 2021.
Michelle Bruton, Forbes.com, January 28, 2021
Gui Khury just became the first skateboarder in history to land a 1080 on a vert ramp! The Brazilian #XGames athlete is only 11 years old. Khury was born almost 9 1/2 years after @tonyhawk first landed the 900 at X Games.
@XGames, May 8, 2020
SEE MORE EXAMPLES

What are other words used in discussion of the X Games?

This is not meant to be a formal definition of X Games like most terms we define on Dictionary.com, but is rather an informal word summary that hopefully touches upon the key aspects of the meaning and usage of X Games that will help our users expand their word mastery.