What does yo mama jokes mean?

Yo mama jokes are cheesy insults making fun of someone’s mother. They generally put down a mother in the abstract for being fat, stupid, old, ugly, or the like—things you should never say about a mother!

The practice of making yo mama jokes is more about joke-telling than it is about genuinely insulting someone’s actual mother. Please note, though, that some may take offense to the jokes because they make fun of weight, intelligence, appearance, or age.

my mom, your mom

Where does yo mama jokes come from? 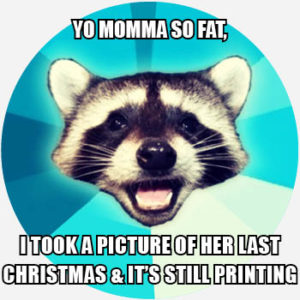 We have been insulting moms since the beginning of time, apparently. Researchers found a Babylonian stone tablet from 3500 BCE containing a number of jokes and riddles. One wisecrack asks who—or what, as the translation is open to interpretation—has had intercourse with “your mother.” The punchline, unfortunately, has been lost to time.

Even The great Shakespeare himself also loved a good yo mama joke. In Titus Andronicus, when brothers Chiron and Demetrius accuse an interloping Aaron of having “undone” their mother, Aaron shoots back: “I have done thy mother.” Um, snap?

Contemporary yo mama jokes are closely associated with a Black male youth word game called the dozens, where opponents trade insults about each other’s family, with yo mama being a form of “your mother” in Black English. Sociologists have documented the dozens since the 1930s.

Yo mama jokes tend to mock the target’s mother’s weight, intelligence, appearance, or age. The jokes are set up with Yo mama so…

Here are some examples:

A cousin to yo mama jokes are claims someone has slept with another’s mother (e.g., Sorry I’m late to work, bro, but your mother just wouldn’t let me go to bed). Yo mama jokes became very popular in the 1990s and early 2000s, so much so that in 2006–07 MTV aired a show called Yo Momma, which was essentially a televised version of the dozens.

Examples of yo mama jokes

My brother is telling me “yo mama” jokes and “yo mama so fat when she died she broke the stairway to heaven”
@LiaSforza, May 2018
Our personal favourite option, however, is asking Alexa: “Tell me a ‘yo mama’ joke.”...Rather than responding with anything rude, Alexa will instead say something positive and uplifting about how great your mother is.
Shivali Best, The Mirror, April, 2018

Who uses yo mama jokes?

While yo mama jokes are meant to be harmless, that still make fun of weight, age, intelligence, and appearance. So, be mindful that they can offensive and perpetuate harmful stereotypes.

In telling yo mama jokes, people generally aim to show off their wits more so than intending any actual ill-will. It’s unclear why people enjoy the so-bad-it’s-good humor in online listicles and videos of yo mama jokes online, but they do.

Your mother, yo mama, your mom, yer mum are variants of the phrase yo mama in this joke genre.

Yo mama so dumb, they told her it was chili outside, she went and got a bowl!” pic.twitter.com/5HJQhUlt2e

This is not meant to be a formal definition of yo mama jokes like most terms we define on Dictionary.com, but is rather an informal word summary that hopefully touches upon the key aspects of the meaning and usage of yo mama jokes that will help our users expand their word mastery.