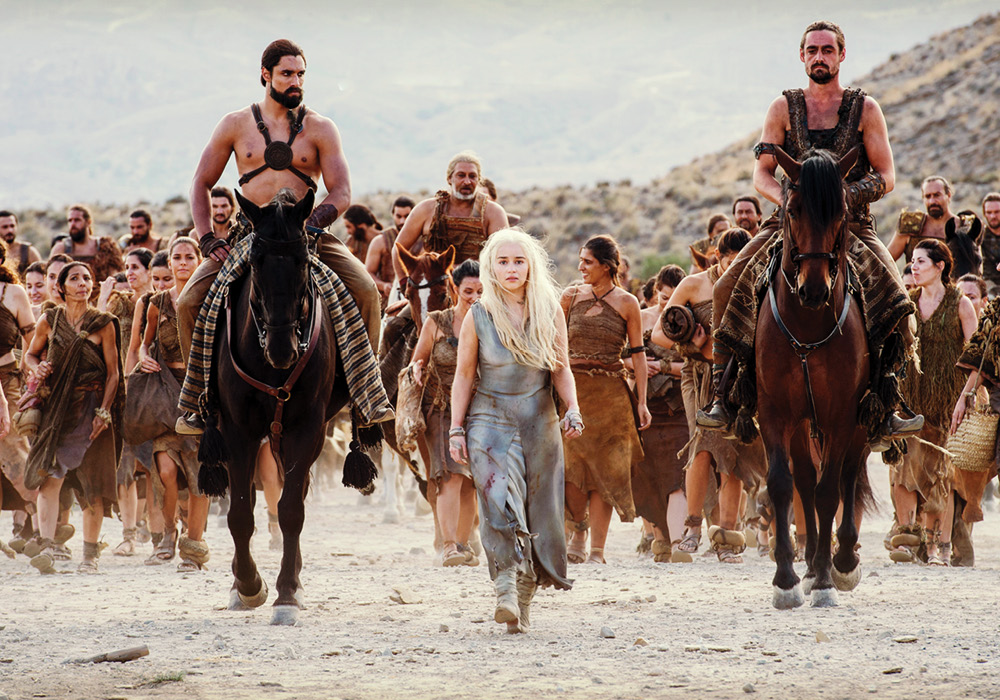 David Peterson lovingly created the conlang (or “constructed language”) of Dothraki for the Game of Thrones television series. But, what are the Dothraki?

The Dothraki are horse-riding nomadic warriors, and their language reflects their culture. Peterson took the Dothraki seeds planted by George R. R. Martin and grew them into a robust and functional language with more than 3,400 words in its original dictionary.

For example, there are seven different words to describe the various subtleties of striking someone with a sword, including hrakkarikh, “a quick and accurate strike,” and gezrikh, “a decoy strike.” Another interesting fact: the Dothraki language has no word for “thank you.” 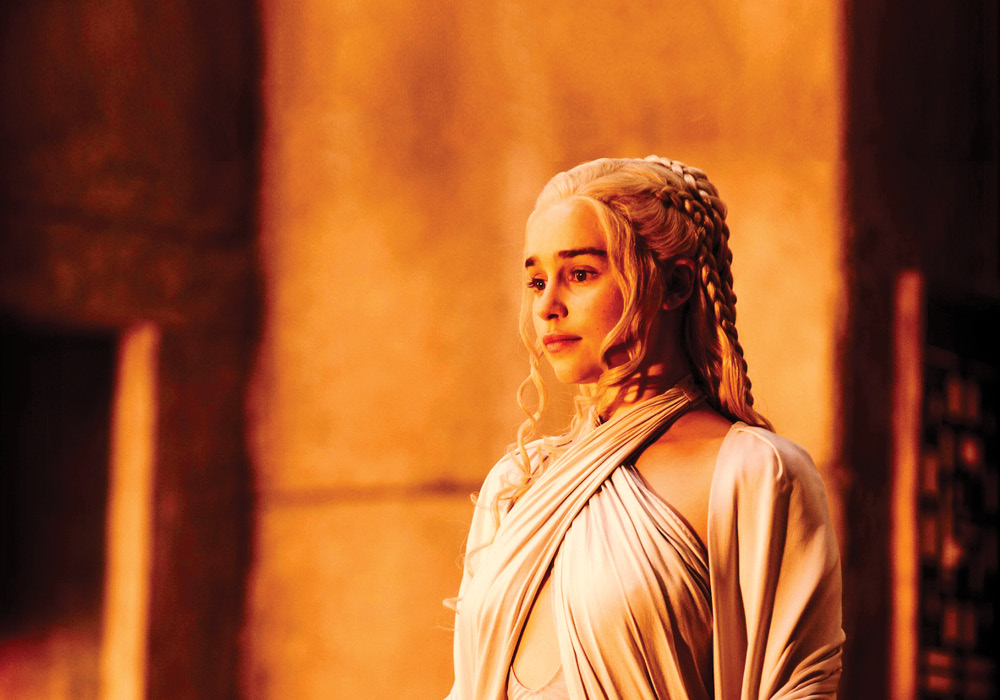 Any fan of the show or book series knows the Dothraki term khaleesi. Literally meaning “queen,” this title is given to the wife of the khal, or the leader of a tribe of Dothraki warriors.

In the show, this honorific is applied to the character of Daenerys Targaryen, also known as the Mother of Dragons. And people liked the name ... because in 2012 (after the show aired), 146 American girls were named Khaleesi by their unapologetically GoT-devoted parents. This number represents a 450 percent increase from 2011, according to the Baby Name Wizard blog. 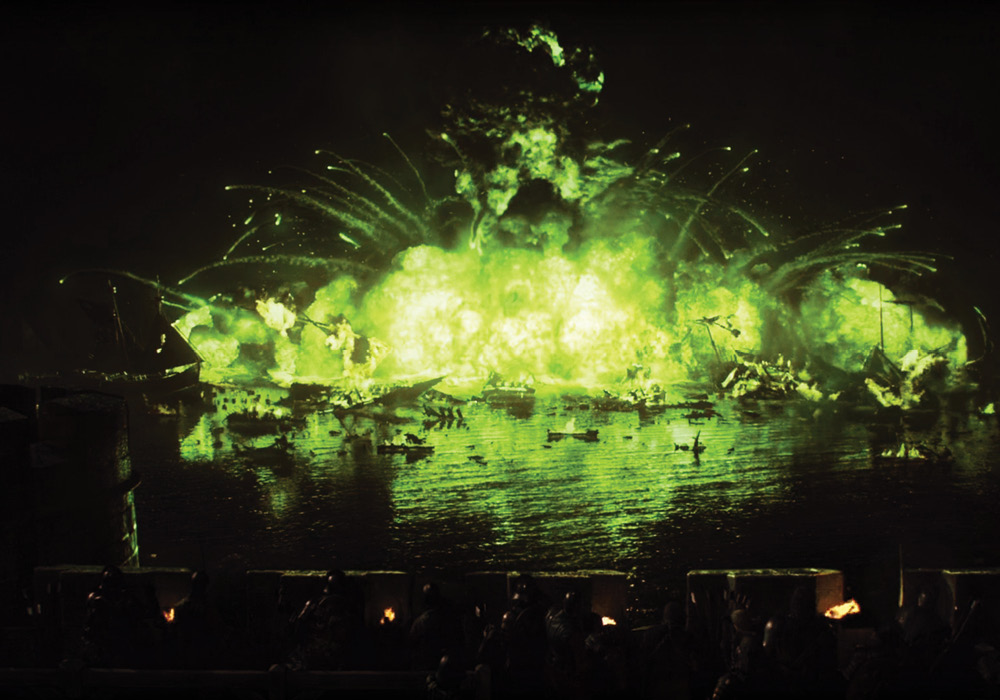 In the second season of Game of Thrones, the Lannisters use wildfire to thwart Stannis Baratheon’s attempt to seize King’s Landing in the Battle of Blackwater. This sense of wildfire existed long before George R. R. Martin sat down to write A Song of Ice and Fire—in fact, variants of this term meaning “a highly flammable composition, difficult to extinguish when ignited, formerly used in warfare” has been around in English since the 1200s. 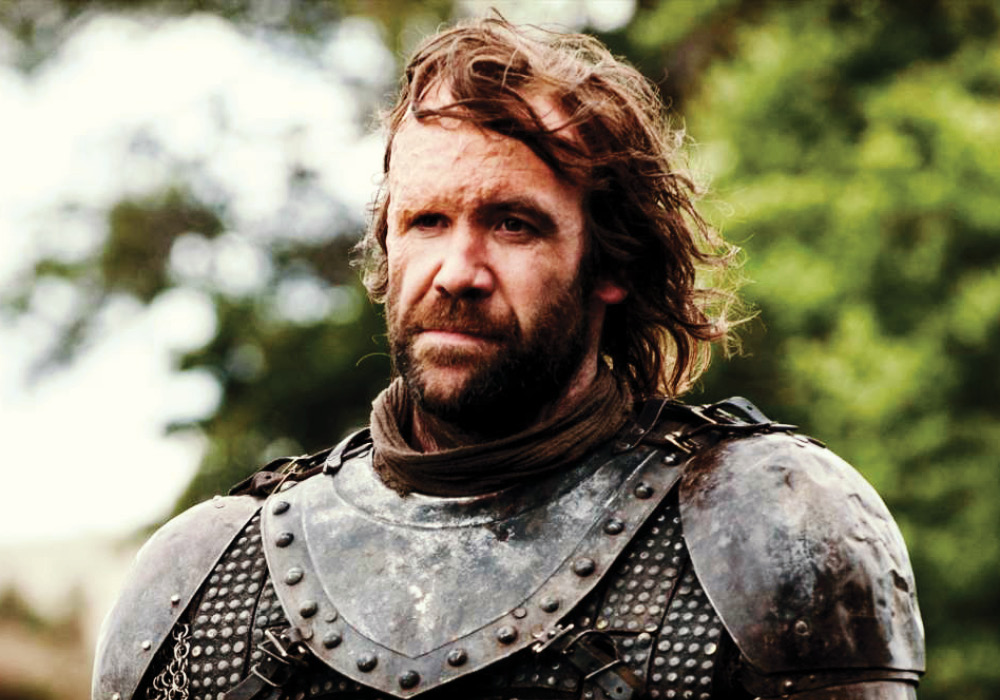 In the Game of Thrones universe, people ignore birthdays, instead celebrating name days.

A person’s name day can refer to two occasions: the first sense refers to “the feast day of the saint after whom a person is named,” and the second to “the day on which a person is christened.” In the Seven Kingdoms, infants receive their names on the day of birth, and so name days serve the same function as birthdays. 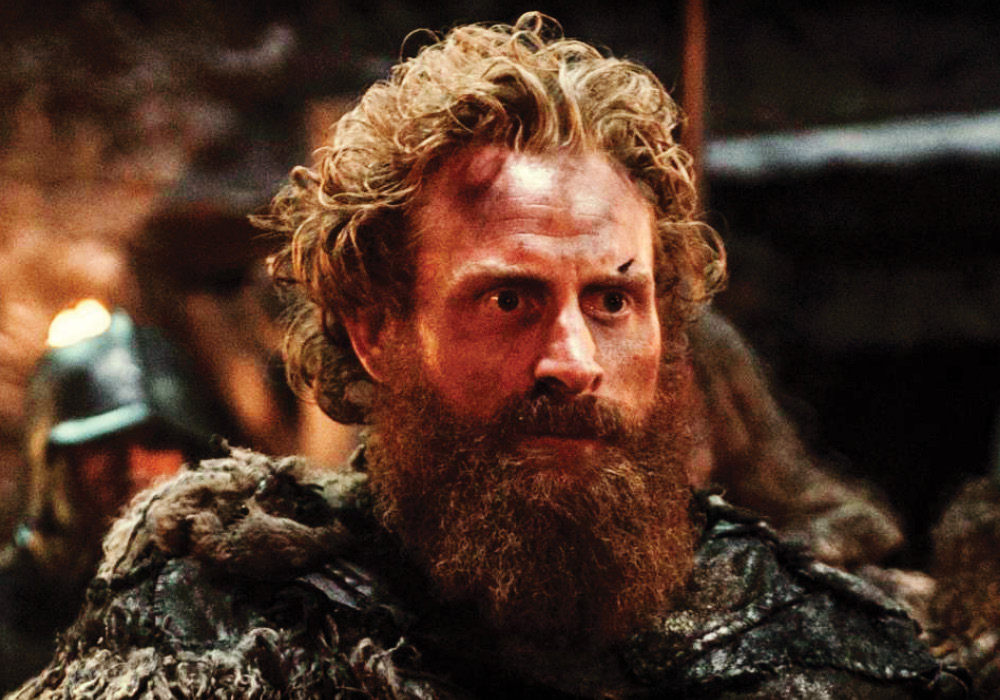 The term wildling entered English relatively recently, in the 1840s, to refer to "a wild plant, flower, creature, or animal."

In A Song of Ice and Fire, wildling is a derogatory term that refers to "a person who lives in the bitter cold beyond the Wall, outside the jurisdiction of the Seven Kingdoms."

These people call themselves free folk and organize under the leadership of Mance Rayder, the King-Beyond-the-Wall, who himself formerly wore the black of the Night’s Watch. In the third season of the show, the wildlings, or free folk, move south of the Wall as the terrifying White Walkers (sometimes called the Others) awaken from a dormant period of 8,000 years. 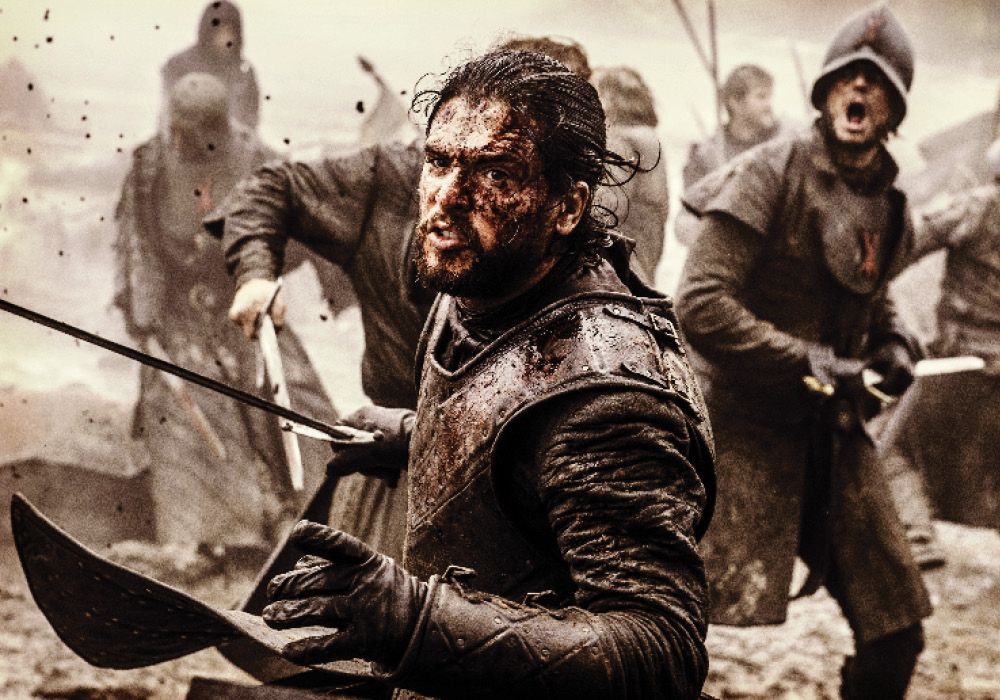 The term bastard sword is a real-life term, arising in Middle English at the turn of the 15th century. It referred to "a sword of abnormal shape or size." In the late 19th century, this term was used interchangeably with hand-and-a-half sword to refer to "a sword with a hilt long enough to enable a double-handed grip." 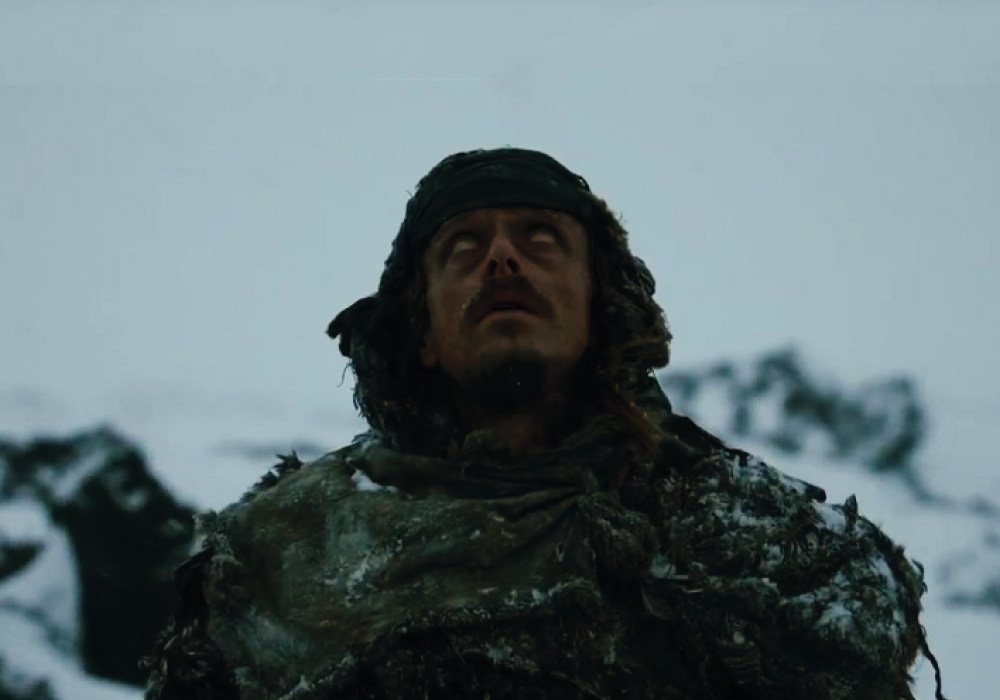 The term warg comes from another fantasy writer, J. R. R. Tolkien. This word debuted in The Hobbit, published in 1937, to refer to "a particularly evil type of wolf."

In Game of Thrones, warg refers to "people with the ability to enter into and control the minds of animals, especially wolves or dogs." Some wargs can take over the minds of humans, though it's not an easy or fun process. 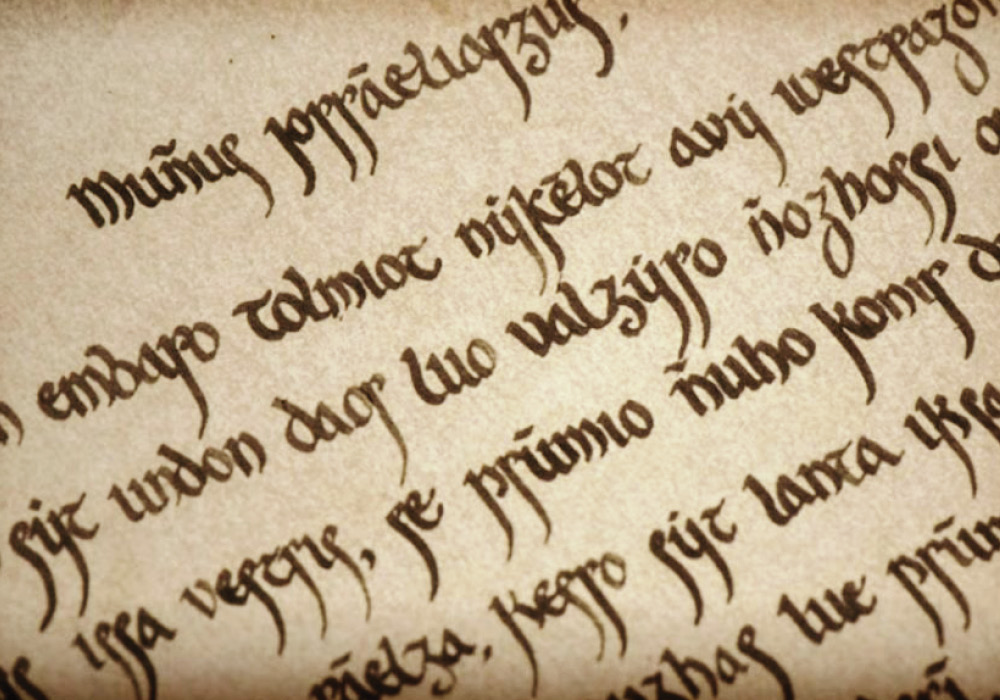 Dothraki isn't the only television language David Peterson constructed; he also created High Valyrian (and its offshoots).High Valyrian was "the language of the now-ruined city of Valyria, once the capital of a great empire." Think of High Valyrian like Latin–it's a rich classical language that very few contemporary people speak conversationally. Some noble families still teach their children High Valyrian, which accounts for Daenerys Targaryen’s fluency in the mostly dead language.Low Valyrian, sometimes called Bastard Valyrian, is a more vulgar form of High Valyrian, and is spoken often by Kraznys mo Nakloz in the third season of the show. 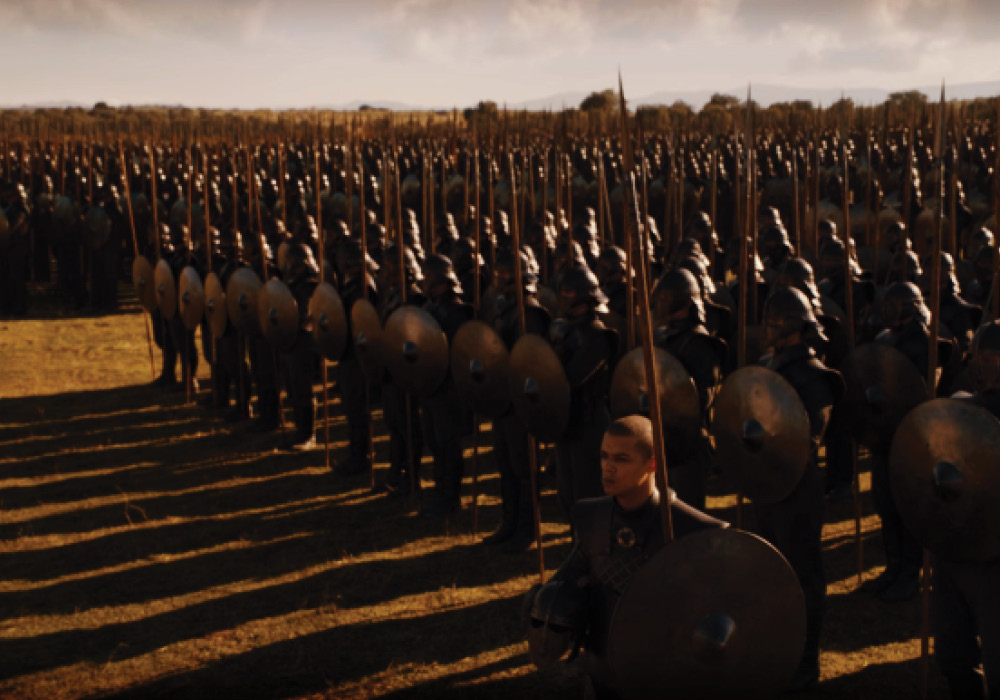 Kraznys mo Nakoz deals in the trading of the Unsullied, "a group of eunuch warrior slaves bred in the city of Astapor." They are known for their excellent fighting skills and extreme discipline in battle.

In the third season of the show, Daenerys buys an army of slaves, frees them, and then invites them to fight for her—they all do.

The term unsullied entered English in the late 1500s and is generally used as an adjective to mean “not soiled, untarnished.” The earliest citation of this term in the Oxford English Dictionary comes from William Shakespeare’s Love’s Labour’s Lost to refer to the purity of a woman. 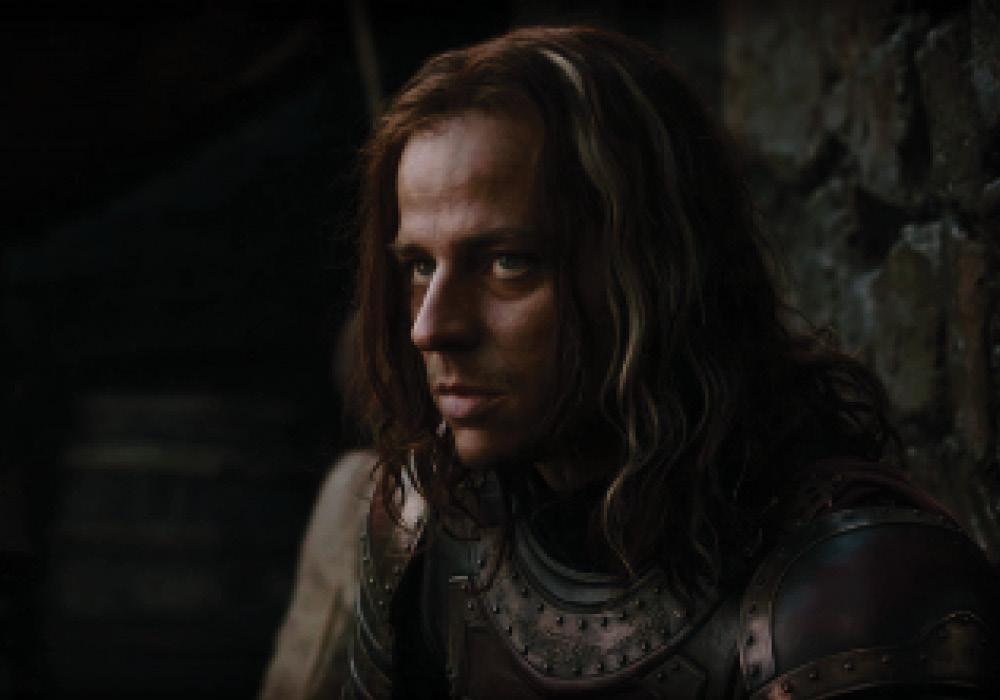 In High Valyrian, the phrase Valar Morghulis means “All men must die.” This saying elicits the response Valar Dohaeris—“All men must serve.”

In the second season of Game of Thrones, Arya Stark, the youngest female Stark child, hears the first part of this exchange from Jaqen H’ghar, an assassin from Braavos. Jaqen is among the ranks of the Faceless Men, an order of assassins who possess the power to shapeshift, "changing their faces at will to take on entirely new identities." Jaqen tells Arya that should she need him, all she needs to do is hand a special coin he’s given her to someone from Braavos and say Valar Morghulis.