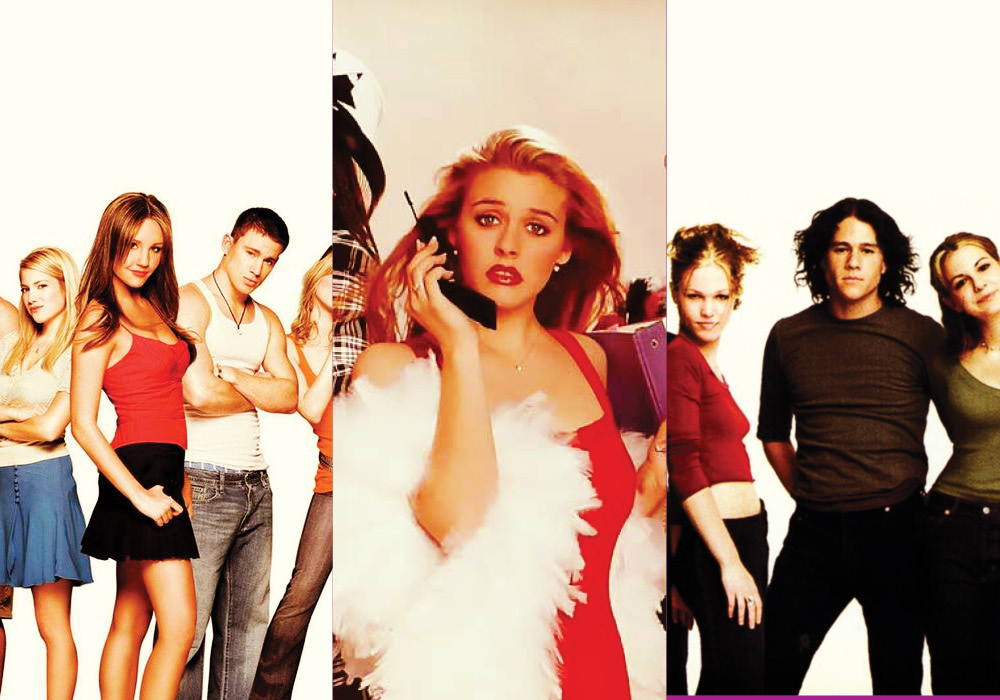 The classics weren't always well-received by first-period students who would much rather sleep in than read about Heathcliff and Catherine’s tumultuous romance.

Those same students, however, may unknowingly count a classic novel’s plot among some of their favorite films—such as one of these nine movies you may not have known were actually based on classic literature. 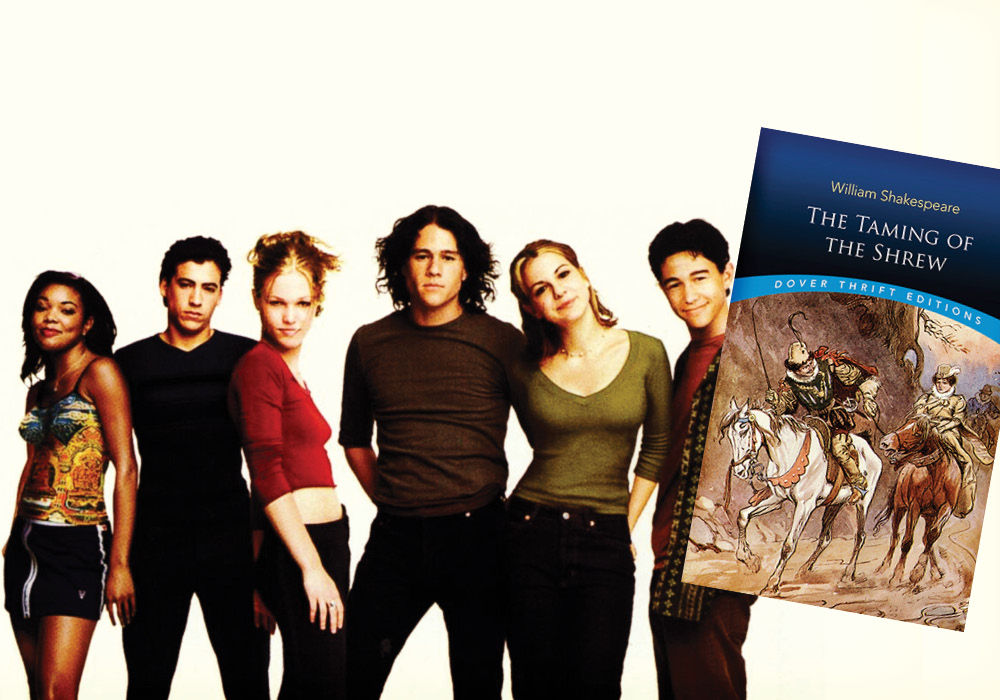 10 Things I Hate About You | The Taming of the Shrew

1999's 10 Things I Hate About You positioned itself as one of the most iconic teen films in recent decades thanks to its star-studded cast and Heath Ledger's memorable Frankie Valli tribute. But beneath its questionable fashion choices and unrealistic melodrama, the movie is actually a modern adaptation of Shakespeare’s late 16th-century comedic play The Taming of the Shrew. The plot of the play and the film line up in these ways: A difficult woman (historically called, yeah, a shrew) is forced into a relationship so her younger sister is free to marry (or date in the case of 10 Things I Hate About You). Other differences between the two lie in the settings, of course—and the fact that there was most definitely no such thing as paintball back in the 16th century. 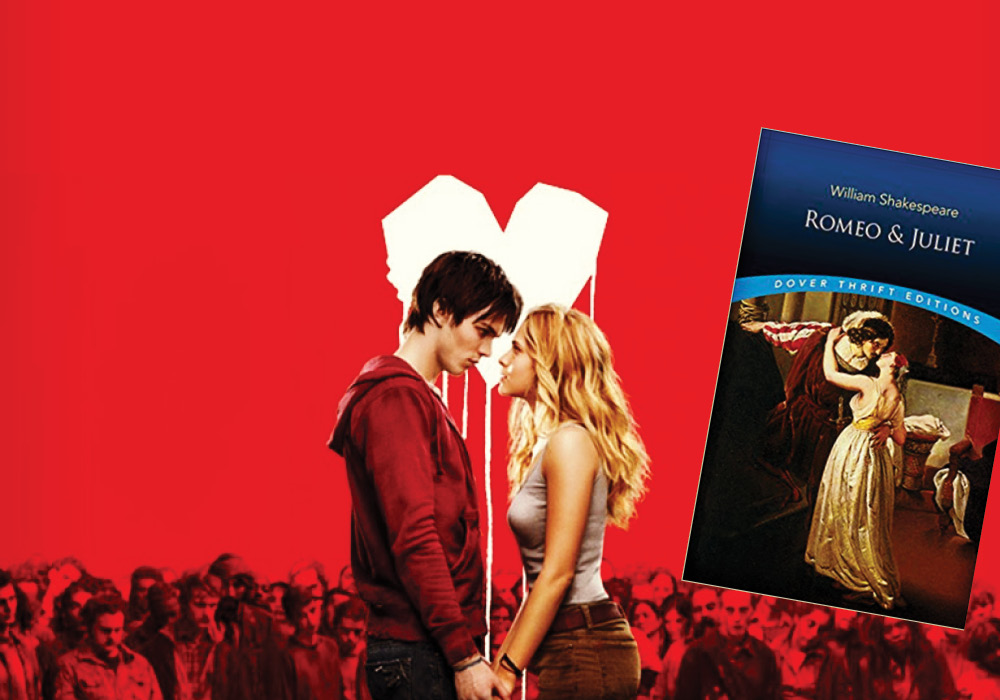 Zombies have shuffled their way into plenty of plot lines, most notably adapted into one of Jane Austen’s most classic novels in 2016's Pride and Prejudice and Zombies. But, that adaptation is a little on the nose for this article.

It should comes as no surprise, though, that Shakespeare would also get a brain-eating twist. Warm Bodies was a 2013 film surrounding the forbidden love between a zombie boy played by Nicholas Hoult (named R) and a living girl, Teresa Palmer (Julie), whose mission is to kill as many of the undead as she can. Take away the fact that Hoult’s character eats Palmer’s boyfriend’s brains to get access to his memories at the beginning of the film, and you have an animated corpse-filled version of Romeo and Juliet.

That’s right: boy and girl, whose families (OK, whose kind) are sworn enemies, fall in love. Oddly enough, this zombie version of Romeo and Juliet has a happier ending than the original. 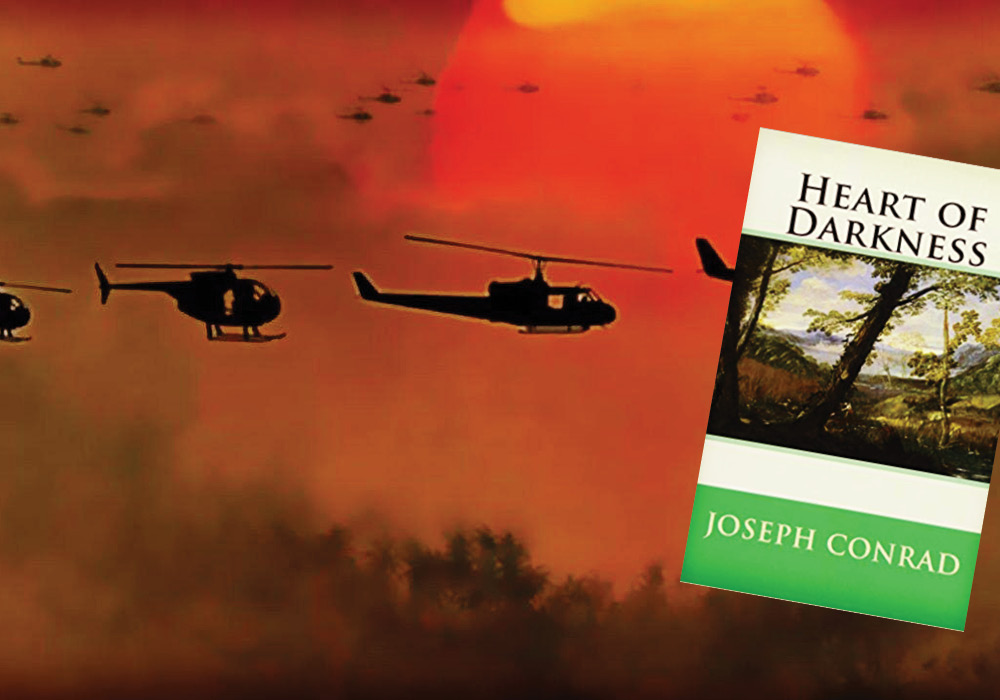 One of two legendary war films directed by the great American director Francis Ford Coppola, Apocalypse Now (1979) tells the story of United States Army Special Forces in the Vietnam War. Filled with mind-boggling imagery and some heavy-hitting Hollywood stars, Apocalypse Now draws much of its story from Joseph Conrad’s 1899 novella Heart of Darkness.

While the novel deals with European colonialism in Africa and the film highlights the horrors of the Vietnam War, both delve into the, yes, darkness of humanity through nightmarish depictions of insanity and violence. Bonus literary content: Apocalypse Now also features central character Colonel Kurtz (Marlon Brando) reading from T.S. Eliot's influential (and bleak) 1925 poem "The Hollow Men." 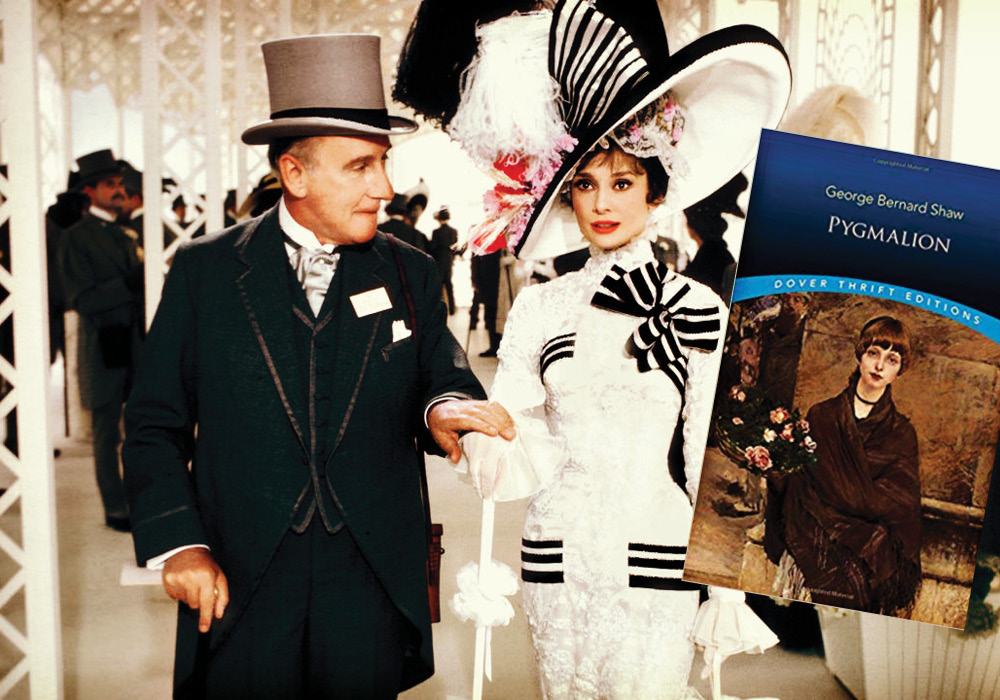 Audrey Hepburn is best known for munching on a breakfast bun while standing outside of Tiffany’s. But, in the 1964 musical drama My Fair Lady, she’s Eliza Doolittle, a feisty, Cockney flower-seller who’s schooled in the way of proper speech and high society by Rex Harrison’s Professor Henry Higgins.

What some may not realize is that the film is George Bernard Shaw’s 1913 play Pygmalion (itself based on a Greek myth about a sculptor who falls in love with one of his statues) set to catchy show tunes. Although both the play and the film depict Eliza’s increasing independence and confidence as she rises above her former station, the film suggests she falls in love with Professor Higgins in the end while the play ends with her chastising him for his dismissive elitism.

Some critics think My Fair Lady undercuts Eliza's empowerment. That didn't stop it from garnering many fans—and Academy Awards. It won eight Oscars in 1964. 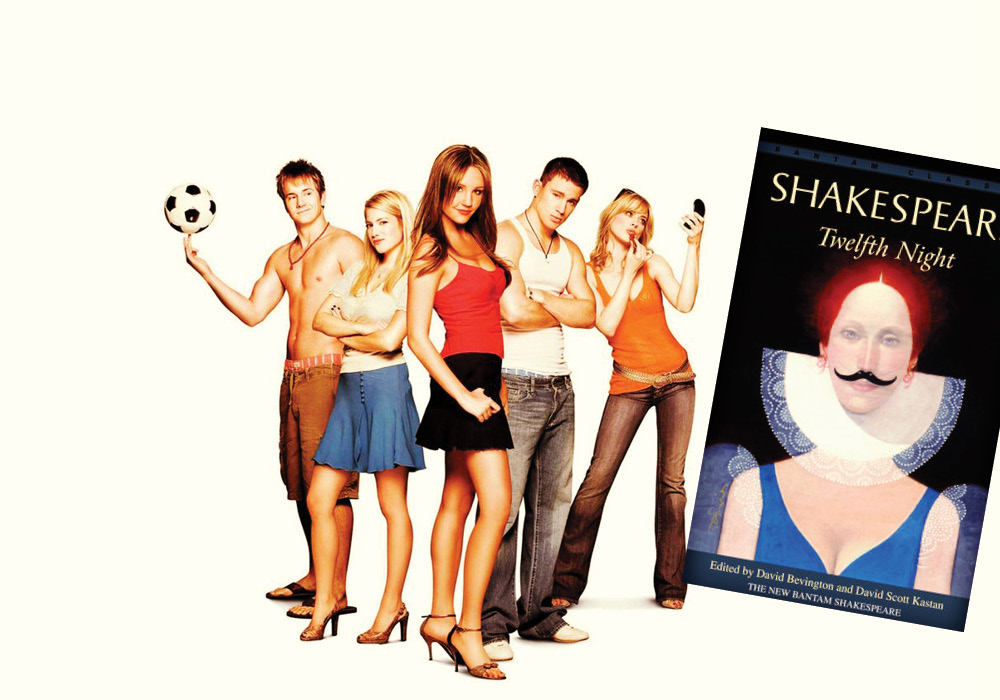 Girl likes boy. Boy likes girl. Girl happens to be dressing up as boy throughout the entire thing. While Shakespeare might recognize this as the storyline to his comedy play Twelfth Night, among others, the modern moviegoer may turn to the Amanda Bynes’s 2006 romcom, She’s the Man. Bynes plays Viola, a free-spirited high school student set on proving a girl is just as good at soccer as any guy out there. So, she decides to disguise herself as her twin brother, Sebastian, to get herself on to an all-boys soccer team. But, she falls in love with a teammate (Channing Tatum, can you blame her?) in the process. 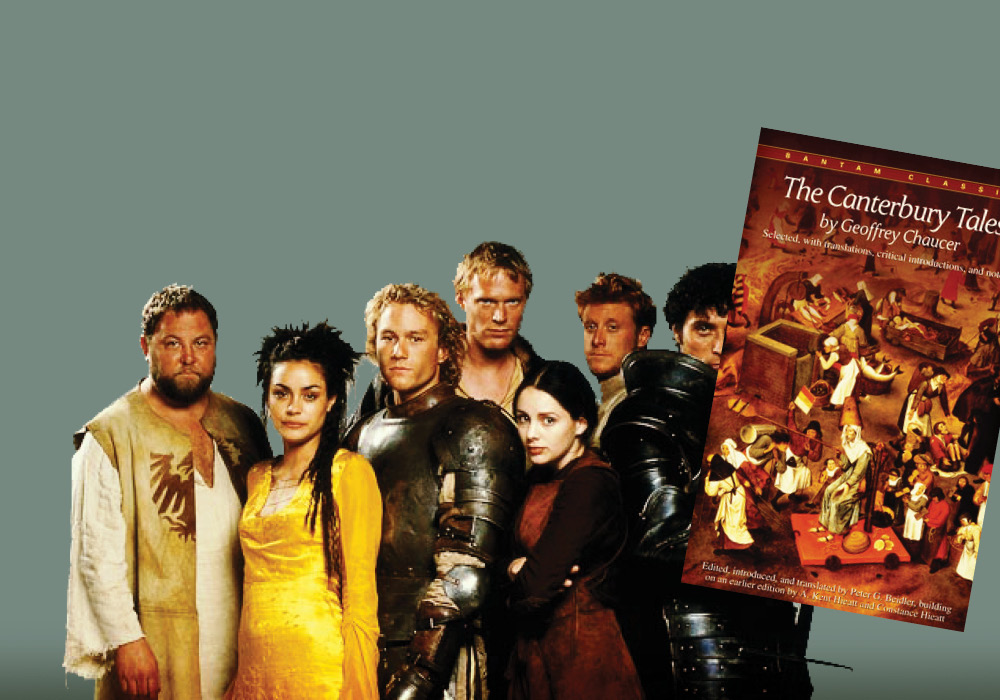 A Knight’s Tale | The Canterbury Tales

Geoffrey Chaucer’s late 14th-century The Canterbury Tales is a collection of stories told by pilgrims on their way to Canterbury, England to visit the shrine of St. Thomas Becket. The first story is one of valor and chivalry as told by a knight, aptly called “The Knight’s Tale.” This may strike a chord, as a film with basically that title, A Knight’s Tale, came out in 2001.

Starring Heath Ledger of 10 Things I Hate About You fame (oh, how we miss you and your adaptations, Heath), the film doesn’t directly take its plot from the original story but certainly is a loving homage to the original work. Geoffrey Chaucer (Paul Bettany) himself is even one of the main characters of the film, getting inspiration for his tale based on characters and events in the film. 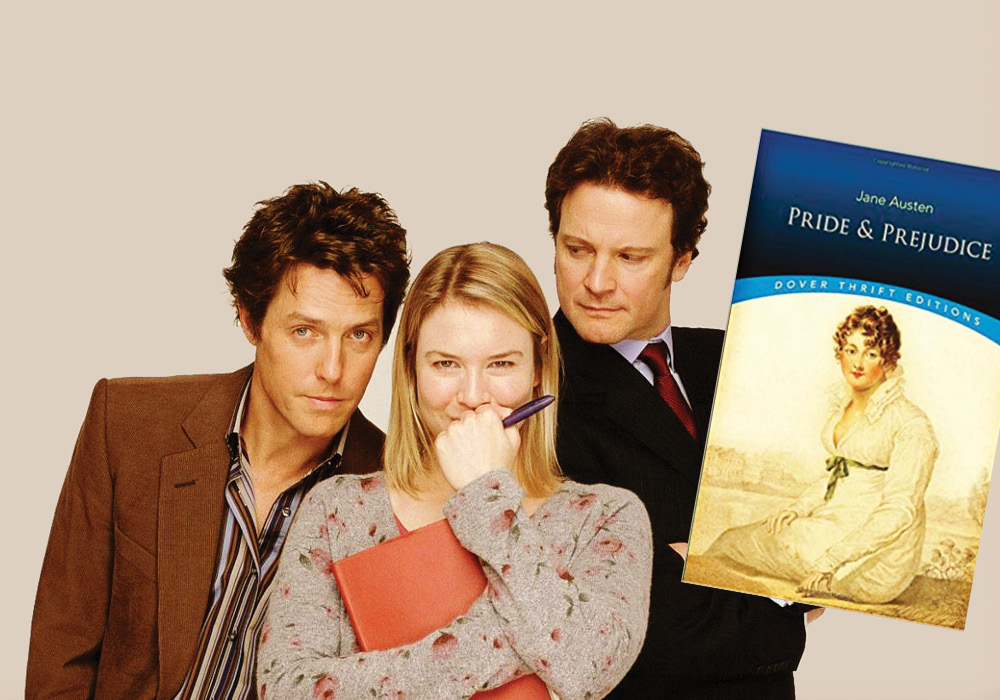 Jane Austen's Pride and Prejudice has gone through a lot since it was first published in 1813. It’s been adapted quite a number of times, given everything from the Bollywood to the zombie apocalypse treatment. One of its less obvious adaptations, though, is the 2001 film Bridget Jones’s Diary (oh yea, and the 1996 book by the same name).

In it, Renée Zellweger’s titular Bridget Jones initially dismisses Colin Firth’s Mark Darcy (wonder who he could be?) as a pompous jerk. After getting out of a terrible relationship, Elizabeth Bennett—pardon us, Bridget—comes to the realization that, despite the differences in their social standing, she and Darcy belong together. It was truly happily ever after, popping out a couple of sequels. 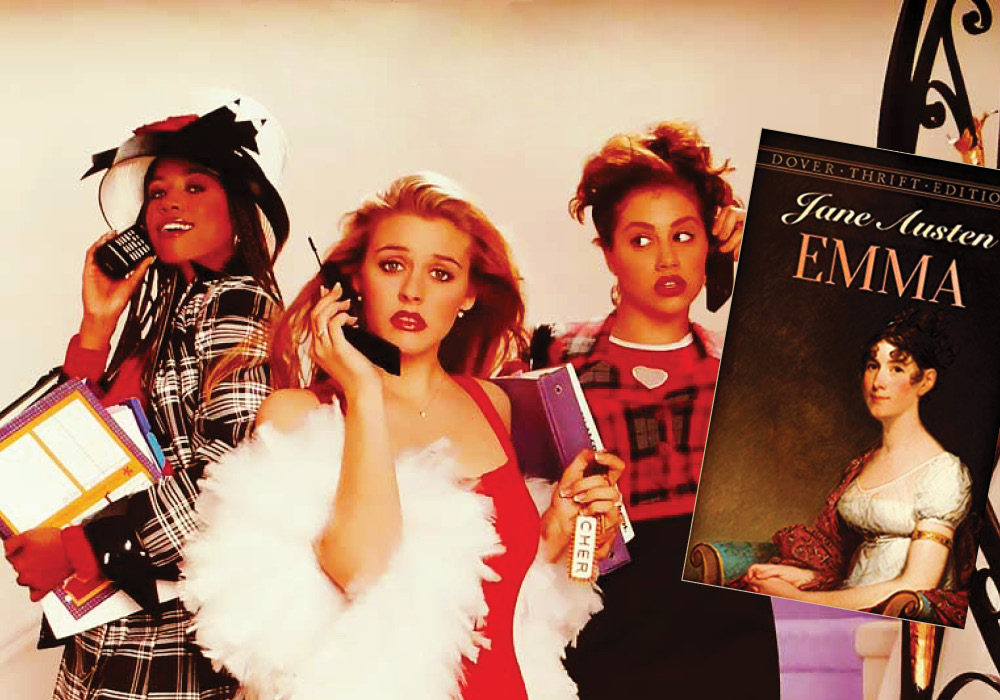 It seems most of us associate the 1995 film Clueless with Alicia Silverstone and Valley Girls. What we may not realize, however, is just how smart it is: The plot is taken from Jane Austen’s 1815 novel, Emma. Both concern strong, upper-class female protagonists who think they can run their friends’ lives. As if!

Hijinks ensue, and both Silverstone’s Cher and Austen’s Emma end up in an unforeseen romance by the end. 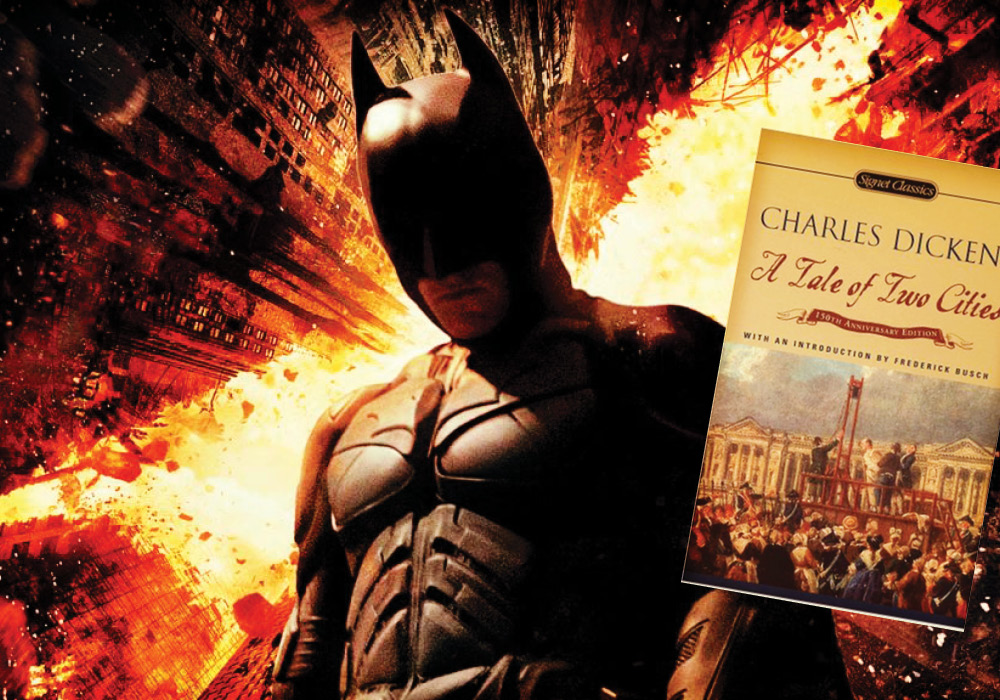 The Dark Knight Rises | A Tale of Two Cities

The Dark Knight Rises, the 2012 final installment of Christopher Nolan’s Dark Knight trilogy, is, of course, based on Batman. And, if watched closely, audiences may find another inspiration: Charles Dickens’s 1859 A Tale of Two Cities.Orphans (Batman and Sydney Carton) sacrifice themselves in acts of heroism. Hardened characters are forced into thievery (Catwoman, anyone? OK, this is more a general Dickensian parallel.) Populist uprisings take center stage (French Revolution, anyone?)