Feedback
Previous Where do words come from? Do they really mean anything? Next Lexical Investigations: Appendix

Welcome to the second installment in our series on Ferdinand de Saussure and the linguistic science of semiology. Now where were we?

In the last post we discussed Saussure’s theory of the “sign” as a combination of the “signified” (the concept represented by a word) and the “signifier” (the spoken or written word doing the representing). According to Saussure, the relationship between the concept and written/spoken word is arbitrary. The word doesn’t matter as long as it’s different from every other word in a given language and every speaker of that language accepts that it represents the same thing.

Despite a wealth of evidence in its favor, the distance between signified and signifier doesn’t sit well with a lot of people. Is it an attack on our personal relationships with our language? Or, worse, does it attempt to prove that those relationships never existed?

If this dichotomy worries you, you’re not alone. These issues were on Plato’s mind over 2000 years ago. In his dialogue The Cratylus the philosopher investigates the differences between linguistic “conventionalism” (akin to Saussure’s theory that words have no inherent tie to the concepts they represent) and linguistic “naturalism” (the lovely but scantily supported view that words naturally belong to the concepts for which they stand). Plato includes Socrates as a character in the dialogue to moderate the discussion and play devil’s advocate by invoking wild historical etymologies. True to form, Socrates does his job a little too well; by the end of the dialogue, the issue is more complicated than when the discussion began.

The question of this fundamental relationship floated around philosophical circles long after The Cratylus, most often with uncertain conclusions, only to reemerge in the literary realm. Shakespeare’s “A rose by any other name would smell as sweet” supports a conventionalist view in Romeo and Juliet. In Through the Looking Glass, Lewis Carroll nods to the naturalist view when Humpty Dumpty declares, “My name means the shape I am,” implying that the sound of “Humpty Dumpty” evokes an image of a round egg-like figure. (See the piece from The New Scientist on this impact.)

In spite of this ancient debate, neither philosophy nor literature could threaten Saussure’s hypothesis…thank goodness science stepped in. 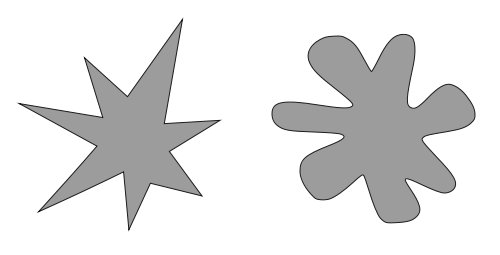 Neuroscientists Vilayanur S. Ramachandran and Edward Hubbard developed this experiment in 2001, a reworking of an earlier study by psychologist Wolfgang Köhler. The goal was to investigate the ability of the human brain to derive abstract properties from shapes and sounds. The experiment tests for properties of synesthesia, a neurological condition in which stimulation of one cognitive pathway involuntarily fires another. A synesthetic might assign certain colors to letters and numbers, or associate various sounds with physical feelings, but the Bouba/Kiki experiment was the first to detect synesthetic tendencies within language.

Back to those shapes: If you called the rounded shape “Bouba” and the spiky shape “Kiki,” then you can count yourself among the vast majority. Ramachandran and Hubbard tested English, French and Tamil speakers and 95 to 98 percent had the same associations. The results of this study represent the first scientific retort to Saussure’s hypothesis of the arbitrary relationship between the signified and the signifier. (Here’s the whole study.)

What sounds (and words) do English speakers think are the grossest? Find out here.

Perhaps supporters of the naturalist hypothesis were just asking the wrong question. Why reach back into the annals of our etymological history to try to link the signified to the signifier, when we can find a common tie in our present-day linguistic instincts.

We’ve just presented a rather rosy rebuttal to Saussure’s argument, but you can bet he has something to say about it. Here’s the shocking conclusion to this tale of sighs and signs.

Previous Where do words come from? Do they really mean anything? Next Lexical Investigations: Appendix
RELATED POSTS