Roger that! 10-4 is a way of saying “message received” in radio communications. It’s also used as a way to “you got it.” 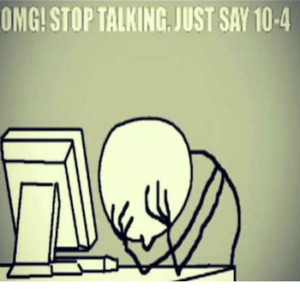 10-4 is one of the so-called ten-codes, or radio signals, invented by the Association of Public-Safety Communications Officials-International (APCO). 10-4 is an affirmative signal: it means “OK.” The ten-codes are credited to Illinois State Police Communications Director Charles Hopper who created them between 1937–40 for use in radio communications among cops.

Ten-Four Day ~ for decades, Oct 4 has been a day to salute radio operators. pic.twitter.com/zpsDNPtorQ

In the 1930s, radio technology was still relatively new and limited. For starters, there were limited police radio channels, so officers couldn’t stay on the line too long or else others wouldn’t be able to get through. The ten-codes were invented to communicate information quickly and clearly. 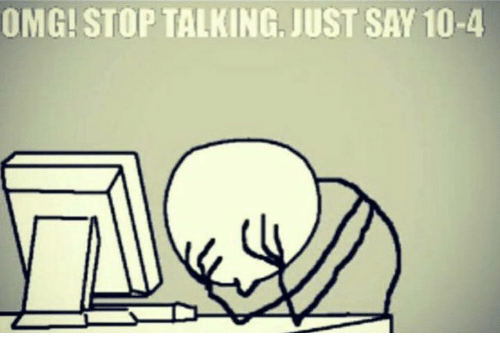 The use of the number 10 before all of the codes was another workaround. It took a split second for the motor-generator in the radios to warm up, and so the first syllables of a radio transmission were often lost. The 10 was used as a placeholder to give the motor-generator time to speed up enough to hear the second part of the code. 4 was simply chosen to mean “acknowledgement” of a message (10-3 meant “stop transmitting” in case you wanted to know).

These handy codes were quickly adopted by others communicating via radio, such as CB (Citizen Band) radio enthusiasts and truckers.

Helping to popularize 10-4 in the mainstream was the 1950s TV crime drama Highway Patrol, starring Broderick Crawford, known for starting his conversations on his radio with 10-4. Oh, the ’50s.

The expression 10-4 further spread into popular culture when it was featured in C. W. McCall’s 1975 song “Convoy,” where he uses trucker CB radio slang like breaker one-nine (a radio channel used by truckers) and 10-4. The song went number one on the charts in the US and abroad and was even made into a movie in 1978.

If "ten-four" means confirmation, does four ten mean disappointments...
@BennesseKid, September, 2017
"Unit one thousand, assess the situation then report back at ten hundred hours. Over." / "Center Control, that's a ten-four. Over." / "Over and out."
J.F. Gonzalez & Mark Williams, Clickers, 1999
This guy held the door for me and i said thank you, he responded ten-four, without thinking i just casually said over and out rubber ducky....
@garrettlee123, January, 2018
SEE MORE EXAMPLES

While still in some use, ten-codes, including 10-4, have been replaced by plain language in more and more police departments due to variation in what the codes mean. Truckers and other CB radio users still use ’em though.

But 10-4 has become a staple expression for saying “OK” in American pop culture, appearing, as we’ve seen, in everything from old-time TV shows to everyday conservations.

I’m just waiting for him to tweet one of these days: “Overhead from military officials in the WH hallway: ‘Roger, roger that’s a big ten-four. I didn’t sign up for this. He’s like the dictators we fight.'” https://t.co/YsAbJFl6xG

This is not meant to be a formal definition of 10-4 like most terms we define on Dictionary.com, but is rather an informal word summary that hopefully touches upon the key aspects of the meaning and usage of 10-4 that will help our users expand their word mastery.