42 is the answer to the “ultimate question of life, the universe, and everything,” a joke in Douglas Adams’s 1979 novel, The Hitchhiker’s Guide to the Galaxy.

The Most Interesting Man in the World, jawn, 📘 Blue Book emoji, 🍩 Doughnut emoji

Where does 42 come from? 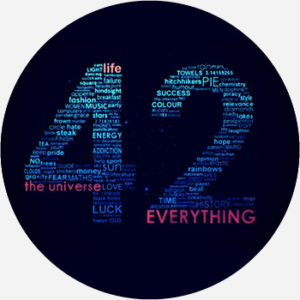 In The Hitchhiker’s Guide to the Galaxy, advanced alien beings create a supercomputer, called Deep Thought, to figure out the answer to the so-called Ultimate Question of Life, the Universe, and Everything. After calculating for 7.5-million years, Deep Thought determined the answer was the number 42. Deep Thought, however, doesn’t know the exact question it was asked to answer, rendering 42 a completely meaningless response. Deep Thought does know, though, that another supercomputer, known as Earth, was to be designed (by Deep Thought himself) to come up with the question in 10-million years. Adams’s joke suggests the quest for any once-and-for-all explanation for existence is absurd and arbitrary.

Why Adams chose 42 has been the subject of much speculation, but in 2007, on a fan-based Usenet newsgroup, Adams put the many conjectures to rest: “The answer to this is very simple. It was a joke. It had to be a number, an ordinary, smallish number, and I chose that one. Binary representations, base 13, Tibetan monks are all complete nonsense. I sat at my desk, stared into the garden and thought ’42 will do.’ I typed it out. End of story.”

Still, many fans of The Hitchhiker’s Guide to the Galaxy hunt high and low for coincidental occurrences of the number 42. Adams’s mysterious number even inspired a 2011 book, 42: Douglas Adams’ Amazingly Accurate Answer to Life, the Universe and Everything, by Peter Gill. As noted in a review of the book on The Independent, there are 42 lines per page in the Gutenberg Bible, the first book printed with movable type. Buzz Lightyear’s spaceship in Toy Story is named 42. The element molybdenum, atomic number 42, is the 42nd most common element in the universe. The game of cricket features 42 laws.

They're here! 'You and 42: The Hitchhiker's Guide to #DouglasAdams' Can't wait to dig in to this book of fan essays (plus one from me) on the work of the great man, with all proceeds to @savetherhino @WhoDaresPublish pic.twitter.com/2qUbrci5oU

I've always gone with '42' | The Meaning of Life Is a Ham Sandwich by @IAmMarkManson
@elisadoucette, March, 2017
In the ASCII Language (computer language), 42 is an * or "Wildcard" The greatest computer ever built was asked what the meaning of life is and it literally told everyone in ITS language that "Life is what you make it"
Badwolf582, Reddit, February, 2013
Though fans are tempted to look for the meaning in the realm of science, perhaps its [sic] easiest (and most satisfying) to think of 42 as exactly what it is: a symbol of life’s inscrutability.
Justin Andress, “Towel Day, Douglas Adams, and the Real Meaning of ‘42’,” Inverse Entertainment, May, 2016
SEE MORE EXAMPLES

Throughout traditional media, on social media, in casual conversation, and other areas of culture, 42 enjoys use as a light-hearted allusion and in-joke among fans of Douglas Adams and The Hitchhiker’s Guide to the Galaxy.

42 pops up as a clever allusion—and tribute—to Douglas Adams’s book in popular culture. For instance, if users search for “the answer to the life the universe and everything” on Google, it provides: =42. As another example, Senator Ted Cruz started off his questions to Supreme Court nominee Neil Gorsuch during his March, 2017 hearings with a reference to Adams’s “ultimate question.” Gorsuch answered “42.”

42, in The Hitchhiker's Guide to the Galaxy by Douglas Adams, is the "Answer to the Ultimate Question of Life, the Universe, and Everything", calculated by a supercomputer named Deep Thought over a period of 7.5M years.

Unfortunately, no one knows what the question is 🤷‍♂️ pic.twitter.com/GJvmXyIGVk

This is not meant to be a formal definition of 42 like most terms we define on Dictionary.com, but is rather an informal word summary that hopefully touches upon the key aspects of the meaning and usage of 42 that will help our users expand their word mastery.