808 is the common nickname for the Roland TR-808 Rhythm Composer, an electronic drum machine from the 1980s popular in hip-hop music.

808 is also often mistakenly referenced as the penal code for “disturbing the peace.” 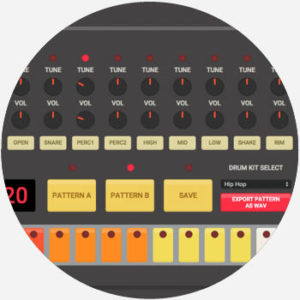 The 808, or Roland TR-808 Rhythm Composer, was developed in 1980 and discontinued in 1983. It was met with mostly unfavorable reviews at the time because the preloaded analog drum beats were found by many to sound too unrealistic for the electronic music scene of the time. The 808 soon took off in the underground hip-hop and rap scenes, though, because of its relatively low price tag and uniquely loud bass drum beat. It became particularly associated with Atlanta’s hip-hop scene in the 1990s.

The 808 sound is most recognizable on tracks like Marvin Gaye’s “Sexual Healing,” Whitney Houston’s “I Wanna Dance With Somebody,” Lil Jon and Usher’s “Yeah!” and the entirety of Kanye West’s 2008 album 808s and Heartbreak.

Though many popular sources say 808 is the number corresponding to the penal code for “disturbing the peace” (allegedly a reference to the sound of the 808 bass over speakers), the claim is unsubstantiated.

The first 808 that went through the sub hit so hard that it knocked over a lamp.
@itsdalmac, February, 2018
By getting your heart pumping you can teach yourself to be OK with that sensation. You learn that although it’s not very pleasant to feel your heart thumping in your chest like an 808 drum turned up to eleven, it’s not actually going to do you any harm.
Chloe Brotheridge, The Anxiety Solution, 2017
With over 4 billion views on YouTube in 2017 as well as 15 hits on Billboard’s Hot Latin Songs chart, Bad Bunny has become a torchbearer for Latin trap — an iteration of Atlanta hip-hop that combines blistering, subdivided hi-hats, the muscular Roland TR-808 drum machine and half-sung/half-rapped boasts delivered in Spanish — all without releasing a proper album.
Spencer Dukoff, Daily News, February, 2018
SEE MORE EXAMPLES

The 808 has taken on a significance in music beyond just its sound—lyrics of songs from genres spanning from pop to hip-hop to trap use the 808 as a figure for any pounding bass line in a hit song. As such, 808 has become slang for a “beat” or “track.” The phrase “heart beating like an 808” is especially common in pop songs.

Because of its prevalence in lyrics, people who aren’t musicians or producers may still understand the reference to the 808 as a drum sound. The term isn’t typically used outside of a musical context.

This is not meant to be a formal definition of 808 like most terms we define on Dictionary.com, but is rather an informal word summary that hopefully touches upon the key aspects of the meaning and usage of 808 that will help our users expand their word mastery.