What does Adderall high mean?

An Adderall high refers to the energetic, focused feeling people get when they use (or abuse) the ADHD stimulant Adderall. 🙇

Where does Adderall high come from? 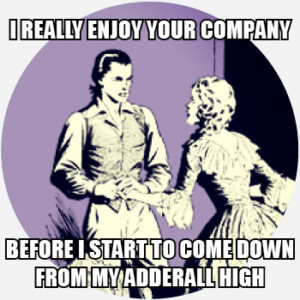 Back in the 1600s, getting high meant having a few too many drinks. Since the 1930s, it’s more often used to refer to the euphoric feeling from using drugs—including Adderall.

Adderall is a brand-name amphetamine (stimulant) introduced in 1996 by Richwood Pharmaceuticals to treat attention deficit hyperactivity disorder (ADHD). The drug is considered a controlled substance in the US, available only by prescription due its high risk of abuse and dependency.

That hasn’t stopped the drug from being illegally sold and taken, though, especially for high-school and college students who feel they need to burn the midnight oil during exams. Use and abuse of Adderall spread in the 1990s–2000s as more and more young people were diagnosed with and medicated for various mental disorders.

Evidence for Adderall high appears online in the mid-2000s, a slang term for the overstimulated, hyper-focused feeling caused by abuse of the drug. People on an Adderall high report having a lot of energy to get stuff done.

Adderall abuse can cause teeth grinding, a lack of appetite, toxic overdose, and oh—it’s incredibly addictive.

i took my last final, im about to pack, i got some whataburger, and this adderall high is mellowing out. 💘
@pastelgreyskies, May, 2018
Next thing I know, I'm literally popping up to 120 mg in a day to chase that Adderall high that I love more than anything, even more than myself.
Lawrence Diller, HuffPost, January, 2016
I love when businesses are like "We're open from 11:30AM until Late!" Like what's late? Are we talking adderall-high college sophomore trying to finish a paper 5hrs before its due or baby boomer falling asleep half way thru NCIS kind of late?
@ldylzrus, May, 2018
SEE MORE EXAMPLES

The slang Adderall high is popularly used in high-pressure school or work environments or to party longer into the night. 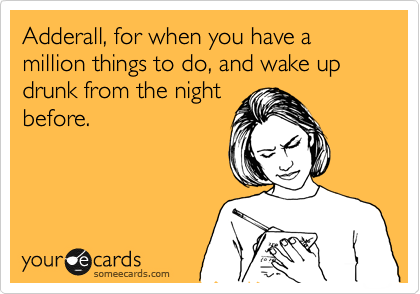 It can be a noun (e.g., There’s nothing worse than coming down from an Adderall high.). It can also be a modifier (e.g., I was so Adderall high instead of writing my history paper, I made a 10-minute supercut of J.D. from Scrubs running his hands through his hair 🙇.).

Sometimes people use Adderall high to characterize someone who’s acting in an …. intense … manner.

When you hit that peak adderall high pic.twitter.com/uWoPuR5cr7

Other times, people use the phrase in reference to coming down from an Adderall high.

me coming down from an adderall high pic.twitter.com/hRzwCOGajQ

This is not meant to be a formal definition of Adderall high like most terms we define on Dictionary.com, but is rather an informal word summary that hopefully touches upon the key aspects of the meaning and usage of Adderall high that will help our users expand their word mastery.