What does aggy mean?

Aggy is a slang term that means “aggravated” or “aggravating” … like “irritated” or “irritating.”

You know that feeling when your ex won’t stop texting you? Yeah, that’s aggy.

Where does aggy come from? 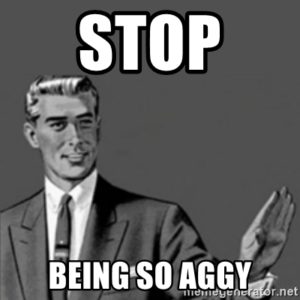 Long before the internet, Aggy was a pet name for the name Agnes. In the late 1800s and early 1900s, aggy was slang for an agricultural college (or student at one)—notably Texas A&M, whose nickname is the Aggies.

In the early 2000s, aggy became a slang term, likely popularized through hip-hop, as a short form for aggravated/aggravating (or agitated). It means “annoyed” or “annoying.”

If you’ve ever written a paper for school and had your computer shut off before you could save, you know what aggy is. A similar slang term is found in UK  slang around the same, this aggy meaning “aggressively angry.”

Aggy can also be criminal slang for an “aggravated burglary.” Aggy, in this case, means forcing your way into a home or building, usually in a violent manner, with the intent of stealing.

I aint give nobody my new number for a reason! Yall aggy as fuck
@domoflyass, December, 2018
I ain't trying to be that, haters wanna see that / But I got 'em aggy, cause I win the gold like Gabby
Nicki Minaj on Alicia Keys', "Girl on Fire (Inferno Version)" (song), 2012 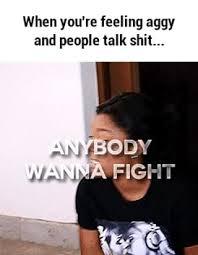 A person can either be aggy or feel aggy. That ex that who won’t stop texting you? They are aggy and you feel aggy when you see their message pop up.

On social media, aggy is used to show genuine annoyance toward another person or group of people.

People get so aggy about what others post on social media, just unfollow them hun not a big deal

Why you so aggy? Huh?? pic.twitter.com/ctgmdaXacJ

The term has also used been used by celebrities to describe people who get aggravated (in other words … butthurt) by their success (e.g., haters gonna hate). On her 2014 song “Shanghai,” Nicki Minaj raps “Ask Jay who he married, eighty thousand in Paris / Stadiums with Queen B and that selfie got ’em aggy.”

This is not meant to be a formal definition of aggy like most terms we define on Dictionary.com, but is rather an informal word summary that hopefully touches upon the key aspects of the meaning and usage of aggy that will help our users expand their word mastery.