What does alternative facts mean?

Alternative facts have been called many things: falsehoods, untruths, delusions. A fact is something that actually exists—what we would call “reality” or “truth.” An alternative is one of the choices in a set of given options; typically the options are opposites of each other. So to talk about alternative facts is to talk about the opposite of reality (which is delusion), or the opposite of truth (which is untruth).

Where does alternative facts come from? 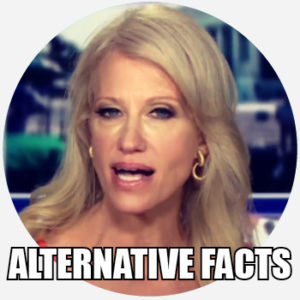 Kellyanne Conway, an advisor to President Donald Trump, used the euphemism alternative facts when she was a guest on NBC’s Meet the Press on January 22, 2017 in a conversation with the show’s moderator Chuck Todd. Conway used this term to describe false statements made by the press secretary Sean Spicer on January 21, 2017, the day after Donald Trump took office. Todd challenged her use of alternative facts immediately, saying “Alternative facts are not facts. They’re falsehoods.” The term caught on widely with critics of the Trump administration.

In conversations about alternative facts, the words post-fact and post-truth often come up. Post-fact and post-truth refer to an environment in which objective facts are a thing of the past. In a post-fact society, facts are viewed as irrelevant and emotional appeals are used to influence public opinion. This is not unlike Stephen Colbert’s concept of truthiness, which is trusting your gut feelings over facts. As his comical Colbert Report persona says, “Anyone can read the news to you. I promise to feel the news at you.”

The expression alternative facts evokes Newspeak, the language of the fictional ruling party’s propaganda in George Orwell’s 1984. In the book, Newspeak leads to doublethink, which is when a person holds two contradictory beliefs in their mind at the same time, and accepts them both. An example of doublethink from 1984 is the idea that “war is peace.”

In addition to Trump and his staff seriously using the word when speaking to the media or about the media, alternative facts can be used by anyone to poke fun at the Trump administration. Many memes have also been created using an image of Conway on television with the phrase alternative facts written on top of the image. And, many people tag “#alternativefacts” on social media to poke fun at someone who has said something controversial or ridiculous.

Alternative facts and its variants have been used on protest signs since Conway said it. At a protest challenging Trump’s controversial executive orders, one dog was spotted wearing a sign labeling it as an #ALTERNATIVECAT. Other variants of alternative facts have sprung up on social media. Hashtags like #SeanSpicerFacts and #SeanSpicerSays parody the way in which Spicer made several easily disprovable statements in his first-ever press conference as the press secretary to President Trump.

This is not meant to be a formal definition of alternative facts like most terms we define on Dictionary.com, but is rather an informal word summary that hopefully touches upon the key aspects of the meaning and usage of alternative facts that will help our users expand their word mastery.