What does another one mean?

Started as a catchphrase by popular music producer and media personality DJ Khaled, another one is a humorous way of repeatedly asking for another of something.

Where does another one come from? 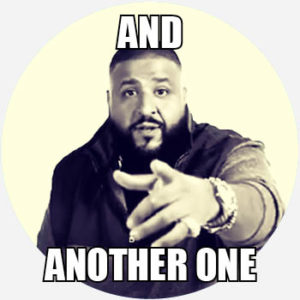 Another one became a popular trend on social media after DJ Khaled released his music video for “How Many Times” in 2015. The video’s introduction features him flirting with several female admirers. He’s kissed by one of the women and then immediately requests another one. DJ Khaled repeats the phrase three times, receiving a kiss after each request.

After DJ Khaled popularized the saying, another one became a humorous way of repeatedly asking for something. For example, one YouTuber used the phrase to prank a fast-food drive-thru worker in 2015. He ordered a bottle of milk, and then repeatedly said “another one” to increase the number of milks on his order. The worker became frustrated, asking “So how many do you want, sir?” The YouTuber responded “another one.” The video now has over 13-million views.

Examples of another one

Me: *follows a cat on Instagram* DJ Khaled: Another one.
@LLcoolscharf, January, 2018
Another one! Make that two straight ACC Co-Rookie of the Week honors for Lonnie Walker IV!
@CanesHoops, February, 2017
Moments later, two giddy young women looking to be around Spidey's age ask for a photo. To Khaled's surprise, they want him to take a photo of them with Spidey rather than a pic with him. Ouch. At least the multiple photos he snaps offers him the chance to utter his signature catchphrase, ‘Another one.
Peter A. Berry, XXL, June, 2017
SEE MORE EXAMPLES

Who uses another one?

Another one is frequently uttered in DJ Khaled’s music. It’s heard in the opening moments of “Shining,” a 2017 track featuring Beyoncé and Jay-Z, as well.

DJ Khaled also uses another one as a “producer tag” to brand the music he works on. Producer tags, also called producer drops, are short audio samples played in the opening moments of a hip-hop track to signify who produced it. When used as a “producer tag,” the catchphrase implies that DJ Khaled is delivering yet another hit song.

Fans of another one usually imitate DJ Khaled’s distinctive tone of voice when using the expression. It’s often used as a playful way to express a compulsive desire for more, with people knowing that DJ Khaled uses it in the same context. It can also be used to signify the continuation of something positive or valuable. DJ Khaled himself once applied the expression to personal fitness. His advice for push-ups or sit-ups? Do another one.

This is not meant to be a formal definition of another one like most terms we define on Dictionary.com, but is rather an informal word summary that hopefully touches upon the key aspects of the meaning and usage of another one that will help our users expand their word mastery.