bad to the bone

What does bad to the bone mean?

Inspired by the title and lyrics of American musician George Thorogood’s 1982 song, bad to the bone can mean rebellious in an exciting, attractive way as well as irredeemably bad.

Where does bad to the bone come from? 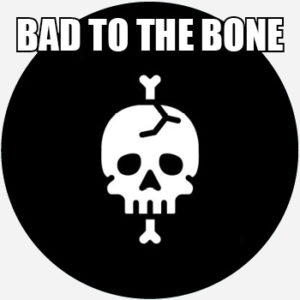 The phrase bad to the bone comes from, and was popularized by, the 1982 blues-rock song of that same name by George Thorogood and the Destroyers. Throughout the lyrics, Thorogood’s speaker brags of his ability to charm women, memorably stuttering the song’s signature phrase as “b-b-b-bad to the bone.”

In this context, Thorogood is using bad in a literal sense of “wicked” or “immoral,” but he is also playing on the word’s inverted slang sense of “excellent.” Green’s Dictionary of Slang traces this sense to the 19th century, noting that it implies something “bad in establishment eyes and thus good in those of any outlaw/criminal, drug or other minority culture.” Bo Diddley (who appeared in the “Bad to the Bone” music video) released a song “I’m Bad” in the 1950s, using bad in the same sense.

To have any characteristic to the bone means to be thoroughly infused with it, an idiom dating back at least to the 1400s and persisting in the English language ever since. An 1817 history of the British Parliament, for example, reported an argument that French immigrants were “French to the bone, in connexion as well as principle.” The blues singer Barbecue Bob used the phrase in a song titled “Chocolate to the Bone” in 1928.

Examples of bad to the bone

Who uses bad to the bone?

Following the release of Thorogood’s song bad to the bone, the phrase made its way into common use to refer to someone, usually a male, who is aggressive or rebellious and often attractively so. The phrase is used in casual conversation, in social media, and in informal writing.

In some cases, unlike in the song, bad is used in its original, sense, making bad to the bone mean “irredeemably bad.” For example, Bad to the Bone was used as the title of a 1991 crime novel. A 1993 fitness book, as another example, described poor eating as bad to the bone. These instances riff on Thorogood’s song title.

This is not meant to be a formal definition of bad to the bone like most terms we define on Dictionary.com, but is rather an informal word summary that hopefully touches upon the key aspects of the meaning and usage of bad to the bone that will help our users expand their word mastery.