What does ballbusting mean?

Ballbusting is a form of torture that causes pain to a man’s genitals. The term is often associated with a woman torturing a man for her own pleasure (either literally or figuratively) or with difficult, nonsexual situations that metaphorically mimic the pain of this type of torture.

Where does ballbusting come from? 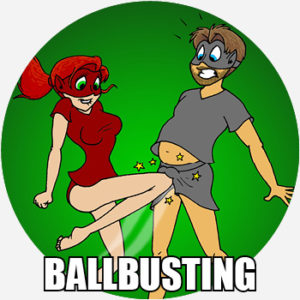 The term ballbusting combines ball, an informal term referring to a man’s testicles, and busting, a synonym of breaking or rupturing. It may additionally allude to the idioms, busting one’s balls (to work extremely hard) and busting someone’s balls (to punish someone, to make matters very difficult for them, or to tease them).

Perhaps nodding to the above idioms, the term also has a related figurative meaning that may have influenced the pornographic terminology. Figurative ballbusting refers to causing pain by insulting or teasing someone, usually a friend or significant other, or to an activity that induces emotional pain the same way the physical act does.

Ballbusting has also developed gendered connotations—since the 1940s, women and men alike have used ballbusting or ballbreaking metaphorically to refer to a woman putting a man in his place.

Damn. My Steelers lost today! Who want's a #ballbusting session for me to vent it out over!?!
@EnchantrixNadia, January 2018
On Girls, Bea Arthur played her character Dorothy as a version of her earlier Maude—brash, ballbusting, and levelheaded.
Andi Zeisler, Feminism and Pop Culture: Seal Studies, 2008
Even more irritating, to me, is Bowne's idea that feminists are seeking to get their equality by beating up boys. The image of the ball busting, steel toed boot wearing, man bashing feminist is nothing new. She thinks that feminists are promoting violence against boys and men as a way to get a leg up on society.
Ouyang Dan, Shakesville, March 2008
SEE MORE EXAMPLES

This is not meant to be a formal definition of ballbusting like most terms we define on Dictionary.com, but is rather an informal word summary that hopefully touches upon the key aspects of the meaning and usage of ballbusting that will help our users expand their word mastery.