What does banana hammock mean?

A banana hammock is a revealing, tight-fitting men’s bathing suit, or sometimes a similarly fashioned pair of men’s briefs. The name refers to the shape of the penis and the resemblance of the front pouch of the garment to a hammock.

Where does banana hammock come from? 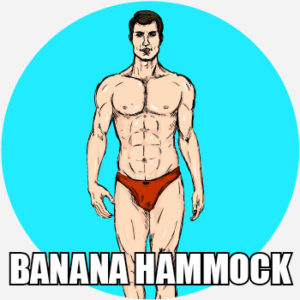 Though there were some earlier uses of the term, the use of banana hammock to describe a skimpy men’s bathing suit appears to start in lifeguard culture.

An 1870 poem describes the fairy Oberon hanging up a banana-hammock, but this literally refers to a hammock made of a banana, owing to the fairy’s diminutive size). In 1988, Banana Hammock, Inc. filed a trademark to sell actual hammocks under the brand name Banana Hammocks. In 1990, Newsweek recorded the use of banana hammock to refer to a “men’s bikini-style bathing suit,” in a glossary of “lifeguard speak.”

Both the garment and the word itself became comedic fodder for sitcoms. In a 2001 episode of Scrubs, the character JD can’t stop blurting out banana hammock at inopportune times. One of JD’s fellow surgeons frequently wears a banana hammock and refers to it as such, at one point telling JD to “hammock up.”

Friends was another sitcom that used the term to humorous effect. The character Phoebe Buffay changes her name to “Princess Consuela Bananahammock,” because “it’s a funny word.” Only later does she learn that it refers to a Speedo.

In the 2006 comedy Borat, the titular character wears a neon-green, stylized thong many refer to as a banana hammock (as well as a “mankini”). This particular swimsuit comically stretches from the groin to the shoulders, and is a style only worn in jest.

You can also buy a small hammock for your kitchen counter to hold your bananas, and this is aptly called a banana hammock.

“So why are men so scared of embracing the banana hammock? Perhaps it’s pure modesty that keeps American men away.”

Gordon Hurd, “Why Are Americans Afraid of the Banana Hammock?” Yahoo News (August 10, 2016)

“Which is all the more reason to admire Alex Breaux, who, as the star of the off-Broadway play Red Speedo, had to stand in front of an audience of 200 for 80 minutes, eight times a week, wearing nothing more than a banana hammock—which he wasn't all that into, either. 'I'm not an exhibitionist,' the 30-year-old actor says. 'I like wearing clothing in public. That's kind of my go-to.'”

This is not meant to be a formal definition of banana hammock like most terms we define on Dictionary.com, but is rather an informal word summary that hopefully touches upon the key aspects of the meaning and usage of banana hammock that will help our users expand their word mastery.